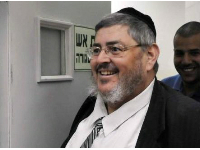 Rav Yehoshua Pollack recently began serving as a consultant for the Jerusalem Building & Zoning Committee in charge of public complaints under Deputy Mayor (Bnei Torah) Rav Chaim Epstein. It turns out that Pollack also offers his professional services as a mediator in huge real estate projects in the local marketplace, referring in particular to the Beit HaKerem Arazim project.

“All said and done, in Beit HaKerem I simply gave them concerning collaboration with Israel Electric. If they want me to advance the project, to push the plan forward as an entrepreneur, then I may have to leave my City Hall post.” His indecisive statement is in line with his view for he says that even if he is financially involved in the project, he does not understand why he cannot advise City Hall. For Pollack, the term “conflict of interests” is non-existent”.

He stresses however that his advice to residents to cooperate with Israel Electric was his own free good advice, and he was not paid or sent by anyone to act as he did.

Pollack headed the city’s Planning & Zoning Committee during the tenure of Mayor Rabbi Uri Lupoliansky. He is viewed as a wizard regarding construction projects and moving them forward, as he has done in many cases in the past. During the Lupoliansky administration he was a very powerful figure in City Hall, with MyNet adding many viewed him as the “acting mayor”. He retroactively legalized many building violations in the chareidi sector and converted public spaces for residential use.

Officials of the Arazim project stress Pollack is not employed by them and he in no way represents them or the project. “He is not authorized to contact any third party on Arazim’s behalf “they added.