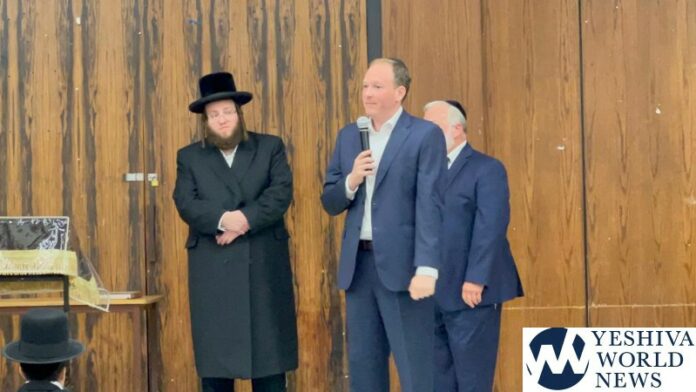 NY Republican gubernatorial Rep. Lee Zeldin on Tuesday blasted the New York Board of Regents for voting to approve new “substantial equivalency” regulations that target yeshivas and other private schools.

Speaking outside the Vizhnitz Yeshiva in Monsey, Zeldin asserted that bureaucrats in Albany are ignoring that “inside of these yeshivas, we have young kids who are receiving an education that is promoting values values of service of family, boys and girls living law abiding lives.”

“We had an opportunity here for so many in state government to be able to speak up and defend everything that’s great about a yeshiva education. But unfortunately, too many people were silent. Governor Hochul was one of them. It’s important when you’re the governor of the state of New York to speak up for what is right,” he continued.

He also trashed the New York Times over its “hit piece” outright attacking yeshivas and making it their top story on 9/11.

“It didn’t dedicate that space to the anniversary of 911,” Zeldin said. ‘The world saw a new king come to power in one of our allied nations. No, this opportunity was taken to target Yeshivas.”

“What we saw with this substantial equivalency pushes one to target a particular community and it was wrong. I’ve spoken up against this in the past. I spoken up against this over this past weekend. I’ll do it today, and I’ll do it in the future. This attack on yeshiva education was wholly unacceptable. The rhetoric, the allegations, not telling the full story and trying to cast the yeshiva experience in the worst light possible.”