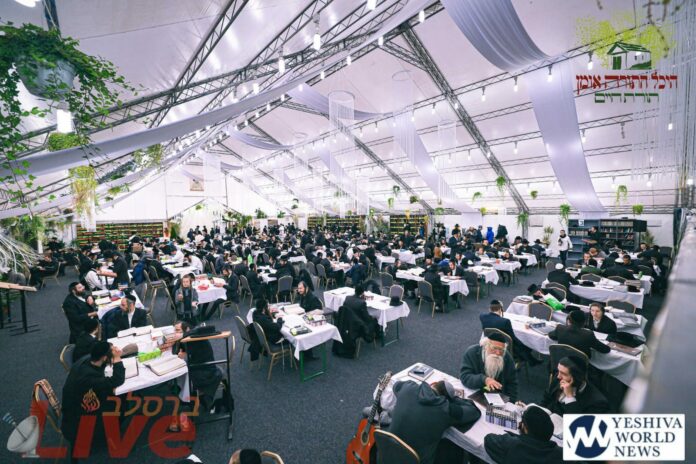 With a fierce debate continuing to rage over whether Breslov chasidim should be traveling to Uman for Rosh Hashana amid a deadly war, YWN spoke with M.M., a chasid of Rebbe Nachman who recently made the long and arduous journey to the famed city.

M.M., who requested that only his initials be used in this story, said that this is his 26th consecutive year of going to Uman – he’s been going since he was 12 years old – but it’s not his first time overcoming significant obstacles to get there.

“Prior to this year, the most challenging time to get to Uman was in 2001, just after the 9/11 attacks,” M.M. said. “The skies were completely closed, making it literally impossible to get anywhere near the country.”

But on Shabbos afternoon following the attacks, flights resumed, and immediately after the zman, M.M. hitched a ride to the airport, bought a ticket, and hopped on a flight to Warsaw. Once in Poland, he took a taxi to the Ukrainian border, walked into the country, and then taxied to Lviv before finally reaching Uman just hours before Rosh Hashana began.

“What I noticed that year was the incredible ruach of the davening. Everyone who was there had to put in tremendous effort. And you felt it in the davening,” M.M. said.

He says that the same is expected this year.

Like thousands of others making the trek to Uman this year, M.M. obtained a temporary residency card, similar to a “green card” in the U.S. to make it easier to get into the country.

On Tuesday, M.M. and his 3 teenaged sons began their lengthy trek to Uman, taking a flight from Newark to Frankfurt, Germany, and then took a connecting flight to Krakow, Poland, where hundreds more Breslov chasidim were also attempting to reach the burial place of their Rebbe.

“Once in Krakow, we could really feel the Uman vibes,” M.M. said. “There were thousands of people, taxis and buses all lined up to bring people to Uman. The excitement could be felt in the air. And despite the long trips everyone had taken just to get to Krakow, there was an unbelievable nachas ruach. Everyone was just calm, relaxed, and smiles adorned everyone’s faces.”

M.M. and his travel partners traveled 2.5 hours from Krakow to Lizhensk, where they davened by the kever of R’ Elimelech, before taking another 2.5-hour trip to the Ukrainian border.

There are several options for those who want to cross the border into Ukraine. One could take a train into the country (Breslov chasidim have chartered a bunch of trains to help people get in), enter by foot (the fastest option), or drive in. Because it was raining, M.M. and his family chose the latter option, with the process of simply getting in taking over 2 hours.

Once inside the country, they took an 8.5-hour trip to Uman, stopping about halfway through in Mezhibuz, where they – and thousands of others heading to Uman – grabbed the opportunity to daven at the kever of the Baal Shem Tov.

“As we drove through Ukraine, it was evident how happy the Ukrainians were that we were there. It provided them a sense of normalcy,” M.M. said. “Even more, it was a tremendous kiddush hashem. The Ukrainians saw that we come each year because of our deep connection to Rebbe Nachman, not to take a vacation or party.”

M.M. and his family are now in Uman, eagerly waiting for Rosh Hashana with Rebbe Nachman.

“There are thousands and thousands of people here and the kol torah is unbelievable. There are huge tents set up where people are learning at all hours and the bais medrash is packed with people learning and davening,” he said.

But, what about the war?

“Those who are saying Breslov chasidim are crazy for going to Uman should know this: While there is of course a serious war going on, it’s not around here at all,” M.M. said. “I’ve been here 3 times in the past month and I haven’t seen a single tank.”

“I traveled for 34 hours and the only ammunition I saw was from NATO troops in Poland,” he continued. “The war isn’t anywhere near here. Worrying about the fighting while in Uman is like being in New York and concerned about a fight going on in Detroit.”

“Contrary to what the news says, apart from one single attack on a nearby ammunition depot in the early days of the war, Uman has been completely quiet and life has gone on as usual,” he asserted. “Additionally, the people who live here are not pro-Russia and they don’t pose a threat to us.”

M.M. also insisted that even if it were dangerous to be in Uman this year, Breslov chasidim would have made every effort to be there for Rosh Hashana.

“If the streets of Uman were filled with knives, we would walk on those streets to get to be with Rebbe Nachman on Rosh Hashana,” he said. “If you were never here for Rosh Hashana, you wouldn’t understand it. But if you were, you’d do the same.”