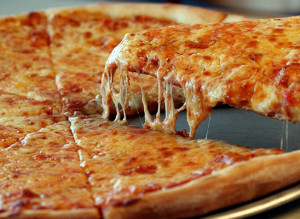 It was reported in the news a few days ago about a pizza study conducted by the USDA. One person saw this and realized that there may more to take out from this Pizza study than the fact that Americans love pizza.

There is a difference of opinion among the contemporary American Poskim of what bracha to make on Pizza.

While Eretz Yisroel Poskim all agree that one should make Hamotzi on pizza, (See Vizos Habracha P’ 21,230 in the name of R’ Elyashiv R’ Schienberg, R’ Shternbuch. Also see Visane Bracha in the name of R S.Z. Auerbach) in America it is questionable.

Why is that? Because the Bracha depends on whether most pizza is eaten as a meal or as a snack. While in Eretz Yisrael it is clear that pizza is eaten mostly as a meal, in America some Poskim were not so sure.

The Pizza study published on Feb. 11 documented when most Pizza is eaten in America. According to this study, an astounding 90% of the pizza eaten in Ameri ca was eaten during meal times, while only 10% is eaten as a snack.

Rabbi Pinchas Bodner, well known Author of Halachos Of Brachos published by Feldheim, wrote a Teshuva, which was publicized in BMG on Thursday, that although he writes in his Sefer that in America one should not make Hamotzi unless one is eating pizza for a meal, it is now clear that R’ Shlomo Zalman ZS”L would hold that one should make Hamotzi on Pizza even if it is eaten as a snack.

(Submitted by a YWN reader)