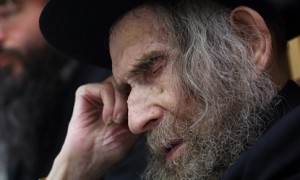 According to members of the steering committee, the date for the “Million Man Atzeres” is final, Sunday afternoon, 1 Rosh Chodesh Adar II 5774, apparently to begin at 16:00.

Members of the steering committee explain the final decision was made on Tuesday night, the eve of 26 Adar I, and while there was indecision regarding the venue, Yerushalayim was selected over Bnei Brak. Organizers report the atzeres tefilla will be held on Yirmiyahu Street, and depending on police and the number of participants, it may spill over towards Herzl Blvd. and the area of the Cords Bridge. Organizers believe this will top the chareidi anti-Supreme Court protest held 15 years ago, which still remains on record as the largest protest in the state’s history.

Organizers feel that due to the fact the event is under the auspices of all the Moetzos Gedolei Yisrael, of Shas, Degel Hatorah and Agudas Yisrael, it is realistic to expect 600,000 participants or more. Organizers explain, as was heard in radio interviews with dati leumi rabbonim on chareidi stations in recent days, if the event is truly billed as an “atzeres tefilla”, then one may expect participation from some of the dati leumi community for many of these rabbonim are opposed to the draft of bnei yeshivos too. Removing the political addresses from the agenda will bring additional participants, they feel. This is the path that was chosen by Maran HaGaon HaRav Aaron Yehuda Leib Shteinman Shlita, who has explained the atzeres is an outcry to HKBH over the Chilul Hashem pertaining to the draft law, without concerns of how this will be received by the media or state officials.

The event is quite costly, with those working to finalize arrangements signaling the price tag will be close to 1 million shekels. The three chareidi parties are splitting the costs equally, which also include paying 120 shekels per hour per policeman assigned to the event. Once can expect that thousands of police personnel will be assigned to the atzeres, which will undoubtedly close down major portions of the city.

The chareidi media will in the coming days announce transportation from areas around the country and other pertinent details.