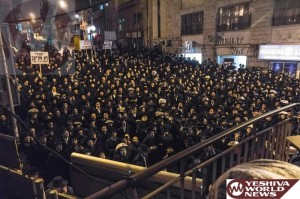 Members of the steering committee on Wednesday 26 Adar II 5774 met with police commanders as well as representatives of other organizations that will be involved in the Million Man Atzeres. The event will take place on Sunday, Rosh Chodesh Adar II 5774 beginning at 16:00. According to Israel Police, the event will conclude at 18:00.

Because it is rosh chodesh, there will not be any slichos recited but there will be tefilos and Tehillim, as well as Kabolas Ohl Malchus Shomayim.

The chareidi media in Israel reports the Agudas Yisrael in the United States has already agreed to run concurrent events, promising there will be tefilla events on Sunday morning to coincide with the atzeres in Eretz Yisrael. (Agudath Israel of America has so far not responded to a YWN request for confirmation.) The same is true of the chareidi tzibur in a number of European countries as Gedolei Yisrael Shlita are trying to achieve maximum tefilos to counter the Chilul Hashem and to cry out to HKBH in light of the gezeiros.

Police commanders, steering committee members, EMS representatives and others will be touring the area between the Jerusalem Cords Bridge and Yirmiyahu Street towards finalizing plans in the hope of the event passing without any major incidents.

Organizers stress the event is an atzeres tefilla, not a protest and not a rally, and the tzibur must act accordingly to be MeKadesh Shem Shomayim.

When asked if the Eida Chareidis will be attending, R’ Benny Rabinowitz, the spokesman for Maran HaGaon HaRav Aaron Yehuda Leib Shteinman Shlita told Kol Chai Radio that he has heard from “high up sources in chassidus’ not affiliated with Agudas Yisrael, in addition to other Yerushalayim chassidim that plan to attend”.

Israel Police spokesman for chareidi affairs Shabtai Gerverchik commented on Wednesday afternoon that many issues must be finalized as planning and preparing are in high gear, just days ahead of the event. According to Gerverchik, Israel Police is preparing for an expected crowd of 400,000.