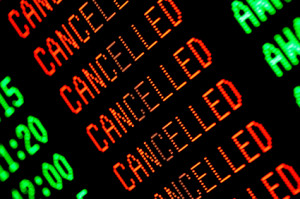 The hardest hit cities were Washington D.C., Philadelphia, New York and Baltimore. On Sunday, airlines scrapped nearly 2,000 flights in Dallas, Chicago and Houston, according to flight tracking site FlightAware.com. There are more than 30,000 flights in the United States on a typical day.

Airlines have canceled more than 87,000 domestic flights since Dec. 1, a record number. Carriers are now much more likely to cancel flights at the first sign of bad weather.

For instance, more than 550 flights to and from New York were canceled Monday, even though the city only got a light dusting of snow. Original forecasts had called for much higher snow totals.