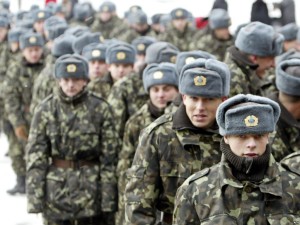 As the fighting in the Ukraine continues, Chabad talmidei yeshiva are receiving draft notices for the Ukrainian army. According to the Chief Rabbi of Ukraine and Chabad shaliach Rabbi Moshe Reuven Azman, the situation is very serious.

Azman tells the Israeli media that “we are on the brink of war” and that the situation is most serious, hoping to see miracles in the month of Adar. He confirms that talmidei yeshiva are receiving notices calling them to serve in the Ukrainian army.

Yisrael Hayom reports under Rabbi Azman’s guidance, the Ukrainian Jewish community is organizing flights to Israel so that Ukrainians wounded in the clashes can receive medical treatment.

“The Ukrainian ambassador to Israel initiated the flights to Israel and we are helping him with this project,” Azman said. “There are volunteers from ZAKA in Ukraine who are providing first-aid courses.”

Yisrael Hayom adds that Yan Epstein, Israel’s honorary consul in Crimea, said some 11,000 Jews lived there, but that they were not concerned. “All the Jewish organizations are operating as usual and there is no feeling of anti-Semitism,” he said.

According to Maariv, talmidim from the beis medrash of the Chabad Brodsky Shul are being inducted along with talmidim from Yeshivas Orach Chaim in Kiev, with the latter affiliated with Karlin-Stolin under the leadership of Ukraine Chief Rabbi Yaakov Dov Bleich.

Rav Bleich is quoted saying “they only had to report to the induction center to register but at present, no one is being drafted”. According to members of the community, if there is a war they will be mobilized and they will have no alternative to serving in the army. Some of the talmidim are thinking of traveling to Russia to avoid being drafted Maariv reports, but they are aware the airport may shut down too.

Talmid Meir Povlovsky is quoted by Maariv explaining that if he is called up he is heading to Israel, explaining it is not possible to be religious in the army, which does not offer kosher food, nor may one observe halacha, one must be clean shaven and Shabbos is a day dedicated to cleaning.

Povlovsky explains it is “just like prior to WWII for those talmidim who are drafted will head to Israel but the question is when the gates will shut and it will be too late. Most of the Jews wait till the last moment to decide. At times, one must simply get up and make aliyah to Israel” he concludes.