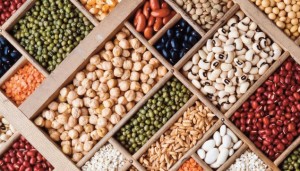 It is a custom that is in the news.  The OU, for example, recently changed its interpretation on what items fall into it.  In certain circles in Israel it is a custom under relentless attack.  And it is a custom that is far older than many religions, including both Protestant Christianity and even Islam.  We are, of course, referring to the custom of Ashkenazic families to refrain from consuming kitniyos.

The minhag to not eat kitniyos (often defined as “legumes”) on Pesach dates back to the times of the Geonim (see SMaK 222). During the time of the Gemara, however, the prohibition did not exist. Indeed, the Gemara tells us that Rabbah ate rice in front of Rav Huna (Pesachim 114b). Rav Ashi also rules that rice may be eaten on Pesach. But, clearly, in the time of the Geonim things changed.

The reason why kitniyos were forbidden, of course, was as a protective measure. The Mishnah Berurah (O.C. 453:6, 464:5) provides a few explanations:

Just what is included in kitniyos? The term “legumes”is a misnomer, as that word simply means a plant in the family Fabaceae (or Leguminosae), or the edible fruit or seeds of such plants, such as beans and peas. The prohibition extended beyond just legumes, however. Rice, mustard, and corn (see M.B. 453:4) are also included. So are buckwheat, lentils, and sesame seeds.

What about Quinoa?  The Badatz of the Eida Chareidis (Madrich HaKashrus 5772, Ch. 15, pg. 47) views it like corn which came to be included in the prohibition, while Rav Heineman from the Star K rules that it is permissible.  The OU initially forbade it, with a printed response by Rav Yisroel Belsky (Ve’Kasher HaDavar (July 2012, pg. 9) explaining that Quinoa fit every criterion for Kitniyos.  Rav Hershel Schachter had disagreed with Rabbi Belsky from the outset on this issue and in December of 2013, Rabbi Genack announced that Quinoa is not to be considered Kitniyos.  They did this, according to the announcement, after investigating issues of cross-contamination in several countries.   In addition to quinoa, OU Kosher has concluded that related canihua, kiwicha and maca seeds would also not be considered Kitniyos.

The TaZ writes that it is simply impossible to clearly define and quantify what is included in the category.

What about coffee? Is that a bean? The Shaarei Teshuvah forbids coffee as kitniyos.  The prevalent Minhag is not to follow the Shaarei Teshuvah and to permit it.  (This was true even before Maxwell House sponsored the English language Haggadahs).

And what about peanuts? Some say yes, some say no.  Many of our older readers will remember the peanut oil with a Pesach hechsher that used to dominate our kitchen cabinets.  No longer.

And why are we so stringent regarding derivatives of kitniyos? This comes from a halachah found in the Rama: the Rama indicates that oil made from kitniyos is forbidden just like the kitniyos themselves. Cottonseed oil is perplexing, because some say yes and some say no. Canola oil is kitniyos, too.

FROM WHEN IS IT FORBIDDEN?

When are kitniyos forbidden? The Sheivet HaLevi (Vol. III, No. 31) rules that the time we can no longer eat them is the same time as for chametz itself. The Maharsham (Daas Torah 453) permits it, until the evening of Pesach itself.

The minhag is to be stringent, but for those direct descendents of the Maharsham (quite a few of whom live in Lawrence), it would be okay to eat kitniyos on erev Pesach.

THE LENIENCIES
There is also a leniency. Kitniyos is battul b’rov if mixed in accidentally with other (kosher l’Pesach) food (see Mishnah Berurah 453:9). In other words, even if the taste is distinguishable, as long as the kitniyos constitutes less than half of the final mixture and is not removable, the food remains kosher! The Rav Shulchan Aruch says that this doesn’t work if it is the main part of the dish – even when less than half.

Sick people may also eat kitniyos on Pesach, and it is permitted to feed kitniyos to infants or to animals. The Chasam Sofer writes (O.C. 122) not to let it cook a long time in the pot, but rather to heat up the water first and then put in the kitniyos (which is what we do anyway, except when using a rice cooker). Ideally, if one is feeding someone kitniyos, a separate pot should be kept for that use (P’ri Chadash 453). There is no need to kasher, though, if an error was made.

Are Kitniyos Muktzah on Shabbos?  No, rules Rav Asher Weiss.  Why not? Because they may be given to a Sephardic Jew on Yom Tov.

WILL IT BE CHANGED?

Another question: Is the prohibition of kitniyos here to stay? The Teshuvah MeAhavah (No. 259) seems to indicate that it is. He writes that even if the beis din of Shmuel HaRamasi or Eliyahu HaNavi were to reconvene, they would not have the ability to permit kitniyos. And, at least according to some poskim, it is a pretty serious prohibition; the Maharil (Hilchos Pesach 25) writes that violating the minhag can cause one to be put to death!

But why all the stringencies? Why do we forbid so many things and their derivatives, as well? Why on erev Pesach, too? Perhaps a philosophical approach to kitniyos can answer a lot of our questions. One reason, given by the father of Koznitz Hagaddah’s publisher (found in the Nuta Gavriel), is that the word alludes to a notion that means small, while Pesach is associated with things that are great.

To elaborate a bit, kitniyos represents something which is the antithesis of Pesach. Of all the holidays on the Jewish calendar, Pesach connotes greatness”a realization of who we are as a nation, and a concomitant recognition that Hashem had great purpose in redeeming us from the hand of Pharaoh. Within the small nation of Israel lies cosmic significance with a national spiritual destiny that can affect the world. Pesach connotes geulah, redemption, with all the overtones implied in the word.

Kitniyos, on the other hand, alludes to smallness. The word conjures up thoughts of a myopic, small-mindedness of sorts, where the cosmic significance and the national destiny of the Jewish people is ignored. Everything that we do has import, even down to the foods we eat or the foods that we do not eat. Perhaps we are so stringent in avoiding kitniyos to help us dispose of the small-mindedness that can get us stuck into just looking at the trees without seeing the forest. For the same reason, the community of the town of Ostreich refrained from eating kitniyos on any day on which Tachanun is not recited (see Be’er Heitev O.C. 131, citing the Maharil). What is the reason?  Perhaps it is to appeal to the inner voice within us to achieve our destiny, both as a people and as individuals.