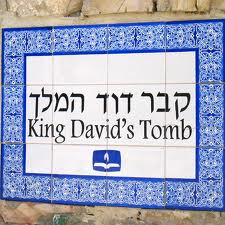 Efforts to save the tziyun of David HaMelech on Har Tzion have been ongoing for some time amid reports the government has signed an agreement with the Vatican. While government officials remain in denial mode, those in the know say otherwise, painfully reporting Prime Minister Binyamin Netanyahu has signed a deal with the Vatican by which Israel will hand over the room above the tziyun to the Vatican during the pope’s visit to Israel in June.

One person working in earnest to prevent the deal from being actualized is MK Rav Uri Maklev. Unfortunately, government officials continue to deny that any such deal was signed so it is difficult blocking a deal officials deny exists.

Yonatan Yosef, a son of HaGaon HaRav Yaakov Yosef ZT”L is also very involved in efforts to save Kever David HaMelech. In a phone interview with Kol Berama Radio on Thursday afternoon, 2 Rosh Chodesh Iyar 5774 Yosef confirmed the information is correct. He adds that his information comes from Christian media sources that have already been advertising the agreement between Israel and the Vatican as a done deal.

I was contacted some time ago by HaGaon HaRav Simcha HaKohen Kook to become involved in efforts to save the tziyun. The rav explained the need to bring more Jews to that area, which is predominately Arab. I began working to bring people and we held numerous melave malka events and other organized happenings to bring more people to the site. I am aware of this from my work at the tziyun of Shimon HaTzaddik. Mekubal Rav Yaakov Addis also visits daily to recite Tehillim every day.

Today, I am conducting a special visit for MKs, including Yoni Chetboun and Moshe Feiglin.

In the past, in a previous government when Avner Chai Shaki z”l of the NRP was Minister of Religious Affairs, the government gave a room, a very small room meters from the tziyun to Rabbi Yechiel Eckstein. It was later learned he was simply an agent and the room was given to the Christians.

After much persuasion the deal was canceled and the government had to pay $265,000 for backing out but it did just that. Yonatan hopes “we will learn from that mess and avoid a repeat performance in the future. The room is above the tziyun in part and a portion above the Sephardi Shul and the Vatican has nothing to do there from our perspective.

Rav kook is visiting gedolei yisrael to get their signature for atzeres tefilla which will take place at the tziyun on Monday 12 Iyar at 17:00. At present HaGaon HaRav Shalom Cohen and others have signed. Rav Kook continues visiting Gedolei Yisrael for their support for the atzeres.