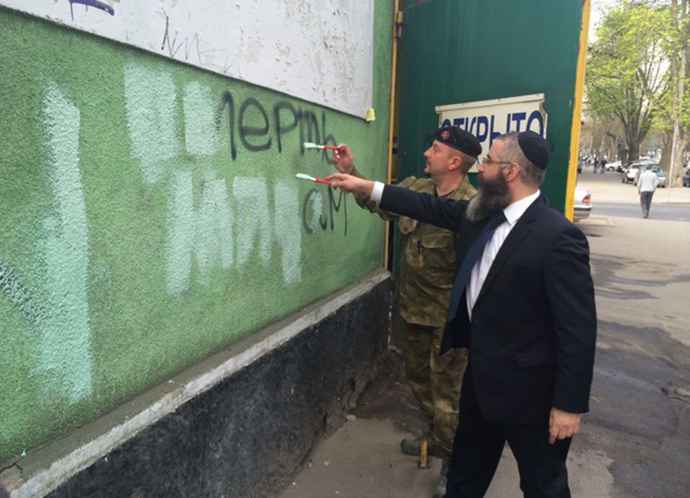 The Jewish community of Odessa is prepared for mass evacuation, should violence re-erupt in the Ukrainian city and threaten to spill over them. Anti-Semitism is a painful issue in Ukraine, with radical nationalism on the rise.

Odessa witnessed several instances of clashes between anti-government and pro-government activists in the past weeks. They culminated in the deaths on Friday of dozens of opponents of the new authorities, most of whom burned to death in a building, besieged by armed radicals, who used Molotov cocktails and firearms in a crackdown on the protester’s camp.

The standoff so far hasn’t touched the Jewish community directly, Odessa Jewish leaders told the Israeli newspaper Jerusalem Post, but they are concerned that this may change. So they have contingency plans for evacuation, possibly out of the country.

“When there is shooting in the streets, the first plan is to take [the children] out of the center of the city,” said Rabbi Refael Kruskal, the head of the Tikva organization. “If it gets worse, then we’ll take them out of the city. We have plans to take them both out of the city and even to a different country if necessary, plans which we prefer not to talk about which we have in place.”

He said he was considering renting a holiday camp to house 600 Jews away from Odessa for the next weekend, considering that Friday marks the anniversary of the defeat of Nazi Germany. The date polarized society: some people cherish the legacy of Ukrainian nationalists, who collaborated with the Nazis against Russia, while others see it as a symbol of victory over Nazism and by extension the modern-day nationalists.

There are fears of more clashes will come on that date in Ukraine.

“The next weekend is going to be very violent,” Kruskal believes.

Evacuation plans have been prepared by other parts of the Jewish community.

“If the situation gets worse, we are planning to move,” Kira Verkhovskaya, head of the Migdal International Center of Jewish Community Programs, told the Post.

Rabbi Avraham Wolf, representing the Chabad hassidic community, said they are taking extra security measures, such as posting armed guards, and are prepared for a possible evacuation. Together with the International Fellowship of Christians and Jews, they have prepared a fleet of 70 buses, fueled and ready to go.