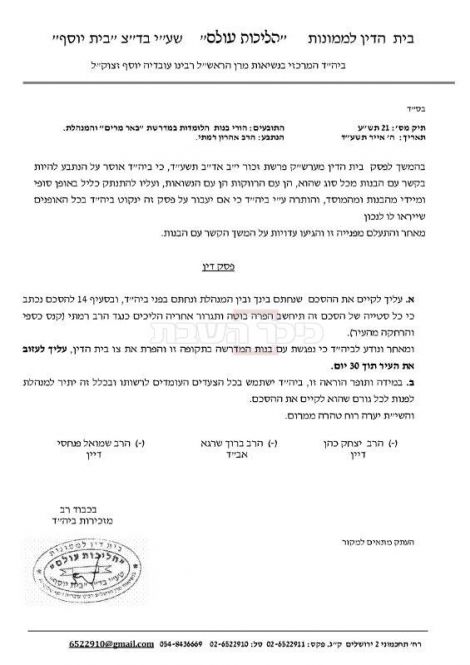 The Halichos Olam Beis Din has instructed Aaron Ramati to leave Yerushalayim within 30 days. Ramati, the manager of Midrashah Be’er Miriam, has faced serious charges over recent years. The Midrashah is located on Shaul HaMelech Street in the Sanhedria neighborhood of Yerushalayim. Ramati has been the target of very serious allegations in recent years leading to the beis din’s decision to leave the city within 30 days.

The beis din, which was established by Maran HaGaon HaRav Ovadia Yosef ZT”L, two months ago rendered its decision against Ramati. This was based on witness testimony but Ramati ignores the decision and remains in contact with the girls. He was subsequently summoned to the beis din a number of times but failed to appear.

The beis din forbade Ramati to have any contact with the girls, including phone or in writing. He was also distanced from the Midrashah, instructed to to have any connection with the institution.