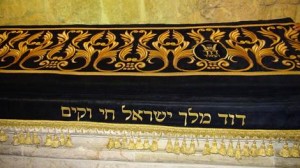 Realizing police planned to evacuate and close Kever Dovid HaMelech ahead of the papal visit which begins on Sunday, 25 Iyar, a group of youths locked themselves inside on motzei Shabbos. A confrontation with police resulted and 26 mispallalim including one IDF soldier were taken into custody. There were about 200 others outside, people who participated in a melave malka at the location.

Some of the youths used chains to lock themselves inside. The incident turned physical and violent after police were given the order to move in to clear out the area. Some of those holed up inside pelted police with rocks and bottles.