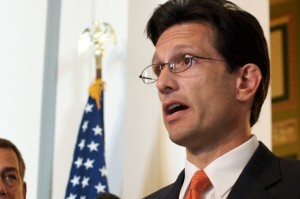 A conservative underdog’s swift dispatch of Majority Leader Eric Cantor is feeding tea party dreams in Mississippi and beyond in the 2014 midterm elections.

Deeply conservative contenders across the country were cheering little-known Virginia candidate David Brat’s primary upset of Cantor Tuesday as a sign that tea party-backed contenders could shift the Republican party to the right. Establishment-minded Republicans, such as Mississippi’s Sen. Thad Cochran and former Sen. Trent Lott, were digging in and casting the next tea party threats as inadequately prepared for office. The next showdown is June 24, when Cochran and his allies are rumbling with state Sen. Chris McDaniel.

“The people of this country… have had enough of Washington, D.C.,” McDaniel told supporters Thursday in Starkville. “What they really desire is a change. They understand the only way to get that change is to change the people we send there.”

He then nodded to Brat’s win over Cantor: “Virginia did that.”

The battle for control of the GOP is especially brutal in nomination fights for Senate seats, and all eyes are on Mississippi and other states, including Tennessee, Oklahoma and Georgia. Candidates and their allies alike were looking to see whether the Cantor loss portends a tea party wave or was an anomaly.

“Liberty-loving patriots in Virginia fired another shot heard ’round the world as we kicked the ultimate Beltway insider, Eric Cantor, to the curb,” said Joe Carr, an under-funded Republican challenging incumbent Sen. Lamar Alexander in Tennessee. “We’ve got a one-shot opportunity to take out another establishment Republican here in Tennessee who has lost touch with his conservative values.”

By Thursday, Cantor’s name was used like a bad word in Colorado’s gubernatorial GOP primary between former congressman Bob Beauprez, the establishment’s choice, and Secretary of State Scott Gessler.

“During his time in D.C., Bob made many very powerful friends like Majority Leader Eric Cantor, the leading Republican voice for amnesty,” Gessler said of Beauprez in a race that, like the Cantor-Brat contest, turns heavily on overhauling immigration. “Cantor put his full weight behind Bob, endorsing him, raising money for him and stumping for him.”

Democrats, meanwhile, were watching the GOP chaos with an eye toward whether the tea party might have outsized impact in the November elections.

“The impact of the Cantor loss will be scaring Republicans from any kind of compromise,” said Rep. Steve Israel, a New York Democrat who leads his party’s campaign committee. “They’re going to get ever more extreme on virtually every issue.”

The Democratic Congressional Campaign Committee was asking candidates to focus on middle class issues while “Republican members are focused on their own internal politics,” Israel said.

Republicans must gain six seats in the November elections to grab Senate control. The GOP is expected to retain control of the House, but Brat’s pounding of Cantor Tuesday ripped open the establishment-vs.-insurgent split that’s plagued the party since the 2010 elections.

The shifting ground was in clear focus in Mississippi, where the Republican runoff for Senate highlights the deep divisions within the party and, perhaps, has far-reaching consequences for the GOP’s future.

In last week’s three-way GOP primary, neither Cochran nor McDaniel won 50 percent of the vote. That sent them — and their outside allies — hurtling toward a June 24 runoff.

The main issue Cochran and McDaniel have in common: Washington’s power. Their views, however, were not shared.

McDaniel consistently has rallied against Washington spending and pledged to cut budgets across government, similar to a message Brat used to win his nomination.

To help McDaniel, the anti-tax Club for Growth began running a television ad Thursday: “Thad Cochran is entitled to respect. He’s not entitled to a lifetime seat in the Senate,” the narrator says.

But Cochran has stuck with his pitch that his seniority in Washington has been a financial boon for Mississippi. On Thursday, he released a television ad featuring Lott, a former Senate majority leader, vouching for Cochran’s influence in Washington.

“Over the years, we had to fight for funds and contracts,” Lott tells voters in the TV spot. He adds, “Without Thad Cochran, we could lose some of these important facilities.”

Cochran is reminding voters that as a former Senate Appropriations Committee chairman, he has brought billions of dollars to Mississippi — one of the poorest states in the nation — for highways, disaster recovery, economic development projects and university research. If Republicans reclaim the Senate majority in November and Cochran wins a seventh term, he is in line to return to that post and the power that comes with it.

“My opponent says he’s not going to spend money like I spend money,” Cochran said Thursday as he visited a truck and heavy-equipment sales center in the Jackson suburb of Richland. “Well, you’re not going to have any roads and bridges.”

McDaniel told The Associated Press that such claims are “scare tactics.”

One Republican strategist said he doubted Cantor’s loss was based solely on tea party enthusiasm and questioned whether the same results could be replicated in other states.

“This was less of a tea party-fueled win than it was a case of a district shifting beneath Cantor’s feet,” Texas-based Republican strategist Joe Brettell said. “Suffice to say, Cantor’s loss will have all members paying a little more attention to the folks back home in the months to come.”