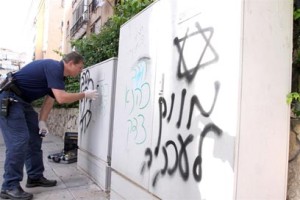 Dozens of immigrants from France took part in a Jerusalem protest calling for ‘Death to terrorists”. The spontaneous protest was announced on Facebook and participants met outside the Prime Minister’s Residence to deliver their message of outrage. The held signs reading “death to Arabs” and “cut of their electricity”

Participants commented on the absurd situation in which Israel provides electricity to Gaza and permits food and supplies in while terrorists fire rockets into southern Israeli civilian population centers with impunity.