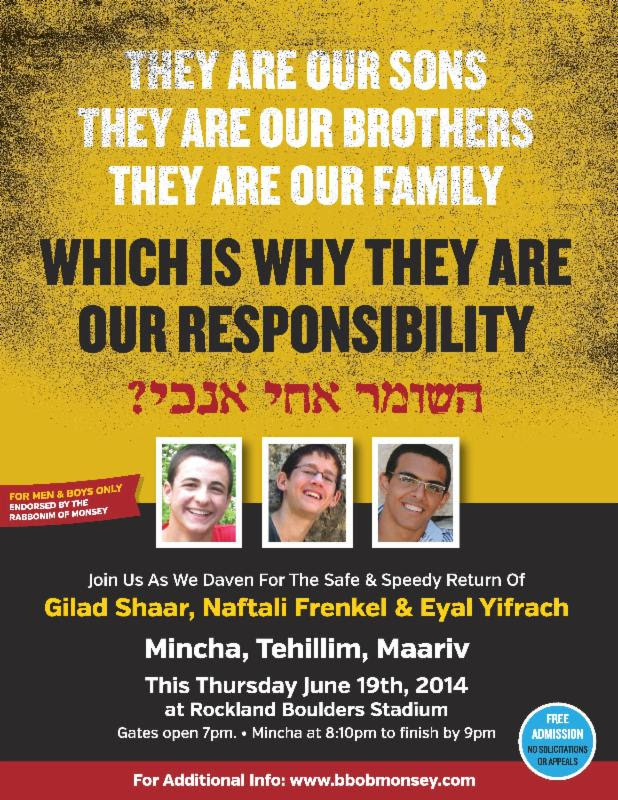 “Our only agenda is creating the kind of achdus we hope will result in a miracle” explained one of the organizers for this Thursday’s Atzeres Tefila event. The one hour program which will consist of Mincha, Tehillim and Maariv and will bring together 5000 concerned Jews to pray for the safe return of Gilad Shaar, Naftali Frenkel & Eyal Yifrach—the 3 Israeli teens whose brutal abduction almost a week ago has dominated both the news and the hearts and minds of Jewish communities everywhere

“Responding with concern and sadness—to an event that happened thousands of miles away is what makes us Jews—this Atzeres is about something more…it’s about showing the world that as a nation we are one—that the very beliefs that keep us alive are also a source of solace, emunah & achdus through even  the most challenging of times.

Scheduled for Thursday Night, June 19 (21st Sivan Hebrew) at Rockland Boulders Stadium starting with Mincha at 8:10pm followed by Tehillim & Maariv, the Atzeres for logistical reasons will only be open to men and boys.

Seating will be first come first served, and organizers are working with the staff and management of Boulder Stadium as well as Chaverim & Hatzoloh to ensure everything runs as smooth and orderly as possible so that the entire event concludes in about an hour.

There is no charge for admission and no solicitations or presentations will be made, except for the “solicitation” made by those attending as they “solicit” the one above for his help. The only “presentation” planned is presenting Hashem—and the rest of the world a 5000 seat stadium packed to capacity with attendees whose only agenda is the safe return of their fellow Jews.