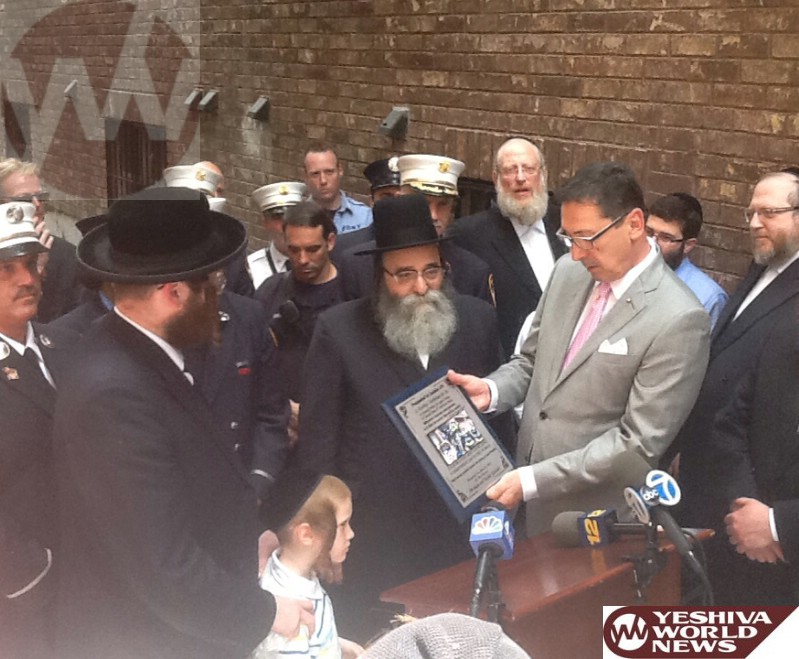 A month and a half after he was strangled in a garage roll-up gate, 7 year old Mendy Gotlieb and his parents stood with the FDNY Commissioner Daniel Nigro in that garage to thank members of Engine 211, Ladder 119, and Rescue Company 2, for freeing him from the gate and for saving his life. The event was arranged by the UJO of Williamsburg and North Brooklyn to thank these brave members for their miraculous work.

“I don’t want to think what it would be like if not for you,” the father, Abraham Gotlieb said in a moving voice. “Thanks to you, Mendy thrives and gives us joy, and we will always remember this.”

Commissioner Daniel Nigro addressed the crowd, and thanked the brave members, before presenting a plaque – together with the father and Mendy – to each of the companies and the 16 members involved in the rescue effort. Commissioner Nigro was also accompanied by the Chief of Department, Edward Kilduff, Chief of Operations, James Esposito, and Executive Officer Captain Elizabeth Cascio. 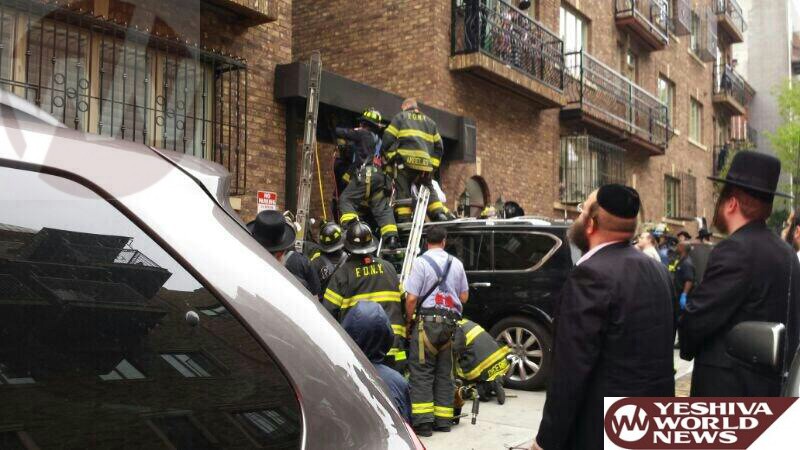 “For fifteen minutes we were all waiting in agony, and offering prayers, hoping for a miracle to happen that Mendy would survive,” Rabbi David Niederman described this agonizing event. “At the conclusion of that endless quarter of an hour, G-d answered our prayers and New York City’s bravest, were the messengers and savior.” Rabbi Niderman also thanked the “dedicated Paramedics and EMTs from the Hatzolah Volunteer Ambulance Corp, who were the first on the scene and drove up under the gate, holding Mendy up, until the Fire Department arrived and freed him.”

“Unfortunately we know, there is not always a happy ending let us now remember and mourn Yakim McDaniels, another Brooklyn boy who tragically died after a similar incident in 2012. We pray for his soul and family, and may they experience no more sorrow,” Rabbi Niederman added. 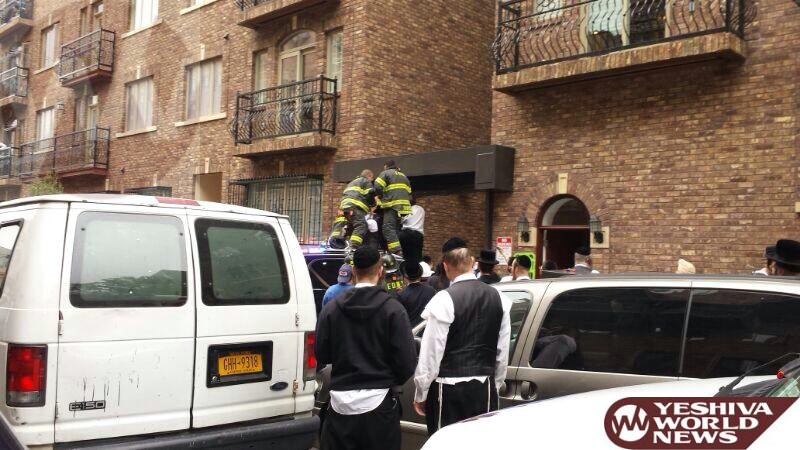 “Today we celebrate the heroism of the members of Engine 211, Ladder 119 and Rescue Company 2 and the dedication of all of our heroes in the FDNY. We celebrate the community commitment of Rabbi David Neiderman and the UJO. Most importantly we celebrate the blessing that Mendy Gottlieb who is here with us today,” said Assemblywoman Maritza Davilla. 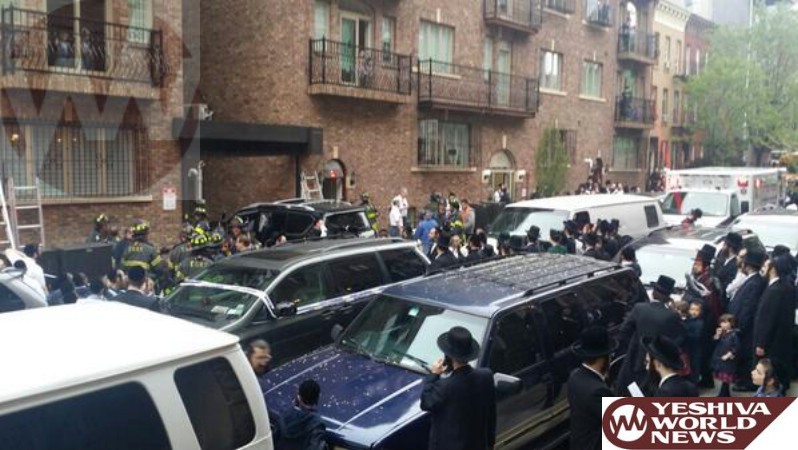 Rabbi Yidel Deutsch of Hatzolah said that the joint response that saved Mendy was an example of the “collaboration and partnership between Hatzalah and the FDNY. “All of us in Hatzolah have tremendous admiration of the job and sacrifices that your firefighters do every single day around the city on behalf of all New Yorkers. Thank you,” he concluded.

“I am incredibly grateful for the FDNY’s quick response that saved Mendy’s life. The FDNY is helping people in distress each and every day and this is yet another example of the important work they do for New York City,” said Councilman Stephen Levin, who was represented at the event. “Thank you to Commissioner Daniel Nigro, the firefighters who saved Mendy’s life, and to Hatzalah for their quick response.” 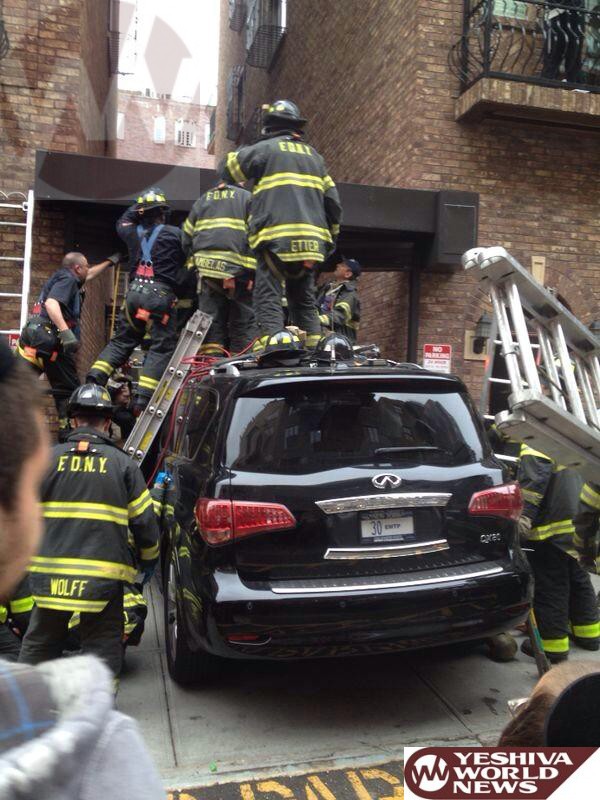 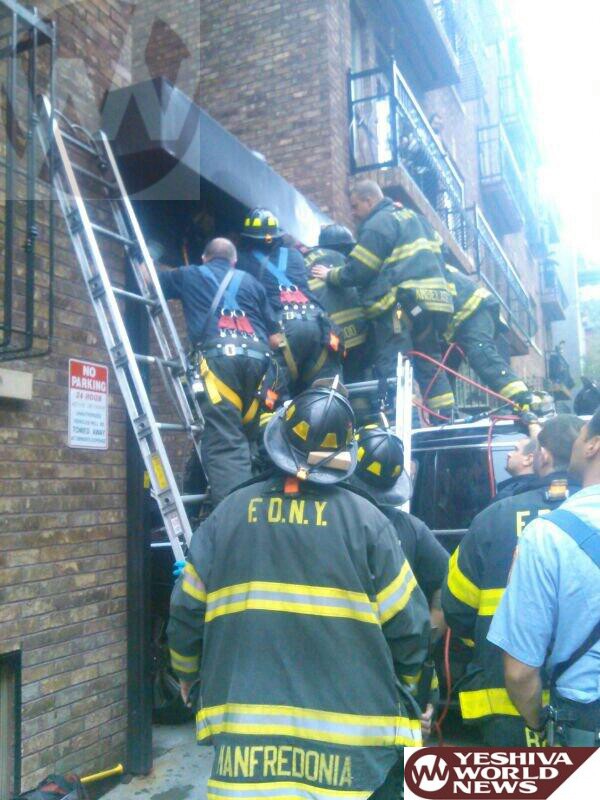 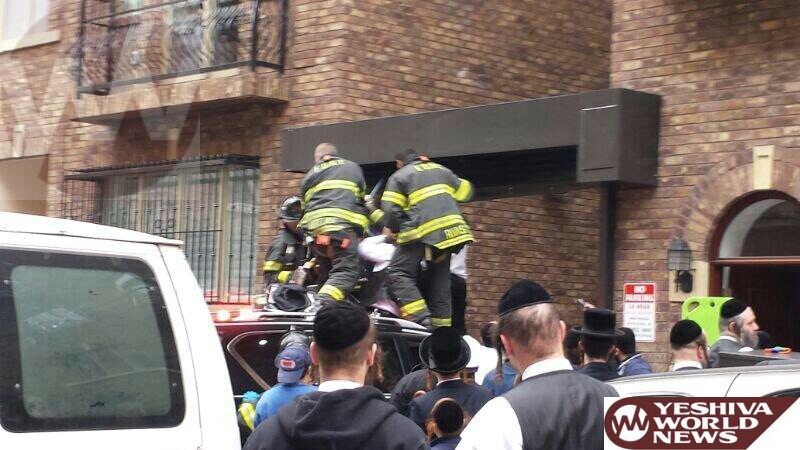