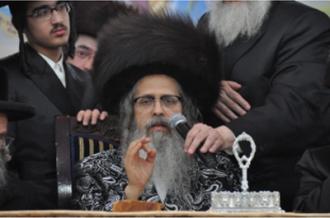 Followers of Rabbi Zalman Leib Teitelbaum have come out strongly in response to remarks made yesterday by Rabbi Aron Teitelbaum, who blamed the parents of the three murdered Israeli teens for their son’s death, saying that those who choose to live in the Israeli settlements are putting their family’s lives at risk.

Thousands of followers of Reb Zalman Leib were stunned by the remarks made yesterday in Kiryas Joel, saying that invoking the name of the Satmar Rebbe, Reb Yoel ZATZAL, to support those statements was an embarrassment to the late Rebbe.

“Reb Yoel was compassionate and had mercy on every human being and always felt in the pain of others, even those from other backgrounds. He would always try to help out any Jew whenever he was asked. How is it possible to say to someone so recently bereaved that they are guilty of murder? Even if those remarks were correct, who gave Reb Aron permission to speak like this during such a painful time?”

“The Rebbe would have never sanctioned something like this,” remarked one elder Satmar chosid who learned in the Rebbe’s yeshiva before the Holocaust. “He was known to daven constantly for Jews to be saved from their pain and heartache.”

It is well known Reb Yoel led a lengthy campaign against the Zionist movement after the Six Day War and that he spoke numerous times against those who said that G-d had performed miracles for the Zionists.

“How is it possible to rejoice at this time and to say that miracles occurred?” said Reb Yoel during one of famous speeches. “Who knows how many Jews died during this war, how many widows and orphans will be left behind? How can we be happy under circumstances like these?”

Many Satmar chasidim confirmed that the Rebbe’s compassion caused him to worry about the welfare of every Jew, no matter where they lived or what their religious affiliation and the Rebbe often proclaimed, “A Jew remains a Jew forever.”

“It is true that the Rebbe blamed the Zionists and the Israeli government for provoking the ire of the Arabs, placing Jews in the holy land in terrible danger, something that was clarified in the Rebbe’s writings. But to say that innocent Jews, who keep the Torah, observe its mitzvos and who are still sitting shiva for their children, that they are guilty of their childrens’ deaths? That is terribly wrong.”