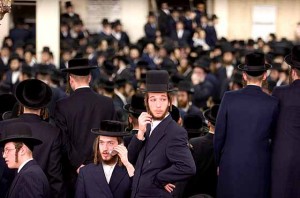 The following is a News12 article:

Community leaders in Monroe are proposing to separate the Hasidic community of Kiryas Joel in exchange for giving its leaders control over a highly contested plan to double in size.

A vote Monday appeared to be in favor of Supervisor Harley Doles’ motion to separate the Village of Kiryas Joel from the town, under the condition that the Hasidic community would have control over a controversial proposal to take 500 acres of land from Monroe.

During the public comment portion of the meeting, the board said that the Town of Monroe had agreed to withdraw its dispute of lead agency.

The bombshell plan was read after a member in the crowd asked the board about the proposal, saying he’d heard about it from a source in Kiryas Joel.

While three of four board members said the motion was in the best interests of both communities, Councilman Dan McQuade unexpectedly split the vote, asking first for a public hearing with Kiryas Joel officials.

Orange County Executive Steve Neuhaus told News 12 that he has asked the state to give the county control over the land deal to calm concerns, and that any plans to split from Kiryas Joel will not be easy.

Councilman Dan Burke says the town is working to coordinate the public hearing with Kiryas Joel officials, but that there’s no set date or location.