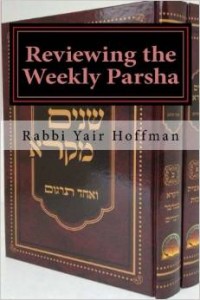 As many people who have looked at Parshas Pinchas this week realize, there is a paragraph mark (called a psucha) in the middle of a Pasuk right before the census (BaMidbar 26:1).

How should this be handled with respect to the weekly Mitzvah of reviewing the Sidrah? The truth is that this happens three times a year, in Parshas VaYishlach, “And the sons of Yaakov were twelve..(Bereishis 35:22)” And in Dvarim, “..from Eilat and from Etzyon Gvar (Dvarim 2:9).”

There are, of course, three ways to perform the Mitzvah of Reviewing the Weekly Parsha.

The Aruch HaShulchan lists all three methods, the Mishna Brurah does not mention the first method.  Our question only pertains to those who employ this third method.  So what should they do?  Do they stop in the middle of the Pasuk?

The Aruch haShulchan recommends that the person do exactly that.  He writes:

Nevertheless, it appears that he should do this . And if a problem is raised of, “any verse that Moshe did not stop at, we do not stop at..”  here, Moshe did, [in fact], stop. Similarly, [the same should be done] in regard to the ten commandments in “Do not murder (Shmos 20:13)” there is a parsha etc., refer there.

The Vilna Gaon had a fourth method, where he stopped at each section end, but also used to stop whenever the subject matter seemed to end. Seemingly, in this situation as well, he would have continued until the subject matter ended.

However, when I first published my Sefer on Shnayim Mikrah, Rav Dovid Feinstein told me that the Minhag is clearly not like the Aruch HaShulchan here and one should not stop in the middle of the posuk. Rather, one should continue until the end of the posuk or the next parsha.

BUT WHICH GENERAL METHOD IS BEST?

Once we are on the topic of the three different methods of doing the Parsha, which is the preferable method?

The answer to that one depends upon who you are.

The GRaZ (285:3) writes that although all methods are acceptable, the method of Posuk by Posuk is preferable, as it most closely resembles the laining when it was translated publicly into Targum.

The particular method of Posuk by Posuk poses an interesting question. The Talmud (Brachos 33a) tells us that the verse “Shma Yisroel Hashem Elokainu etc.” should not be recited two times in a row. The reason is that it may infer that there are two domains in the world, chas VeShalom.

So when we get to Parshas VaEschanan, what should be done when we reach that posuk (Dvarim 6:4)?

Rav Noeh disagrees and states that since no posek ever mentioned this problem, it is insignificant. He concludes that it is quite apparent that he is only doing it for Shnayim Mikreh VeEchad Targum purposes. Binyon Tzion (Siman 36) also dismisses the problem stating that it is only a problem during Davening, but not otherwise.

So we have managed to raise three different questions thus far.  1] Which of the three methods is preferable?  2] If one does it the parsha by parsha method should a person follow the Aruch haShulchan and Rav Shlomo Zalman’s view?  Or should one follow l’havdil Rav Dovid Feinstein’s understanding of contemporary practice?  3] What should a person do about Shma using the Posuk by Posuk method?

We see from all of this the importance of having a Rav. Everyone should seek guidance from their local Orthodox Rabbi.

The author may be reached at [email protected]. His Sefer on Reviewing the Weekly Parsha can be purchased on Amazon HERE.