An IDF officer and a soldier were killed by terrorist gunfire on Shabbos. Terrorists succeeded in infiltrating into southern Israel near Kibbutz Ein HaShloshah via a tunnel from Gaza. Other IDF personnel were injured in the attack.

The incident occurred on Shabbos morning during an encounter between terrorists that succeeded in infiltrating into southern Israel via a tunnel near Kibbutz Ein HaShloshah. The terrorists opened fire at soldiers with anti-tank rockets and automatic weapons fire. The two were killed in the initial assault. The force returned fire and a shootout ensued. As a result, one terrorist was eliminated and the others fled via the tunnel.

Three soldiers were injured in the shootout, two moderately and one sustaining light injuries. They were transported to Soroka Medical Center in Beersheva. One has shrapnel injuries in his head and neck and is in an intensive care unit. Another was admitted to a surgical unit.

After the incident the Izzadin el-Kassam unit of Hamas published its success on the internet.

On Shabbos afternoon a Nachal Corps officer sustained serious injuries as he was hit by sniper fire while operating in northern Gaza. He was transported to Soroka Medical Center in Beersheva.

In the Negev, 32-year-old Olji Oda, a member of the Bedouin community living in an encampment, was killed in a rocket attack near Dimona. Four members of the his family were wounded in that attack by shrapnel including a daughter and infant girl four-months-old. The infant is in serious condition with head injuries and is admitted to an intensive care unit in Soroka Medical Center. A son of the niftar, a 4-year-old, sustained light injuries. His wife and brother-in-law are in light-to-moderate condition. 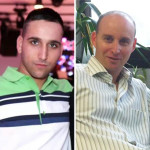