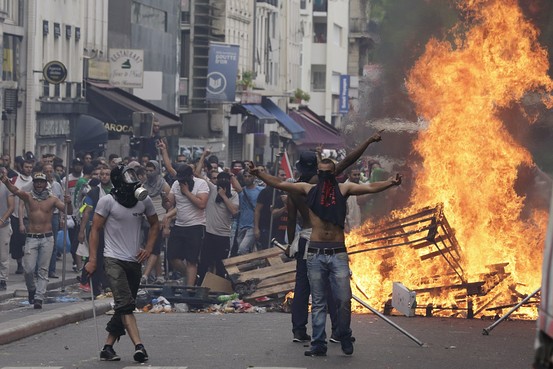 Police clashed on Saturday with thousands of pro-Palestinian protesters who defied a ban on a Paris demonstration over the Israeli offensive in Gaza. More than 30 people were arrested and it wasn’t immediately clear if there were injuries.

Some protesters threw stones and other objects at riot police, who responded with tear gas in an hours-long confrontation in a working class neighborhood, which had been designated as the starting point of the banned march.

Hundreds of riot police stopped the protesters from marching, but several demonstrators climbed onto a building under construction and burned an Israeli flag. Others waved a Palestinian flag from atop a street sign.

The protest degenerated into running battles with police, and at least 33 protesters were arrested, a figure likely to increase, police said.

French authorities had banned the planned pro-Palestinian march after a protest on July 13 turned violent, with two synagogues attacked.

A group of protesters dispersed by the tear gas still managed to hang banners reading “Palestine Will Live” and “Israel Assassins” in front of Montmartre’s famed basilica.