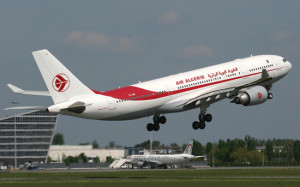 An Air Algerie flight carrying 116 people from Burkina Faso to Algeria’s capital disappeared from radar early Thursday over northern Mali after heavy rains were reported, according to the plane’s owner and government officials in France and Burkina Faso. Nearly half of the passengers were French.

The plane sent its last message around 0130 GMT (9:30 p.m. EDT), asking Niger air control to change its route because of heavy rains in the area, Ouedraogo said.

French Transport Minister Frederic Cuvillier said the plane vanished over northern Mali. He spoke Thursday from a crisis center set up in the French Foreign Ministry.

The plane had been missing for hours before the news was made public. It wasn’t immediately clear why airline or government officials didn’t make it public earlier.

Air Algerie Flight 5017 was being operated by Spanish airline Swiftair, the company said in a statement. The Spanish pilots’ union said the plane belonged to Swiftair.

The flight path of the plane from Ouagadougou to Algiers wasn’t immediately clear. Ouagadougou is in a nearly straight line south of Algiers, passing over Mali where unrest continues in the north.

Northern Mali fell under control of ethnic Tuareg separatists and then al-Qaida-linked Islamic extremists following a military coup in 2012. A French-led intervention last year scattered the extremists, but the Tuaregs have pushed back against the authority of the Bamako-based government.

A senior French official said it seems unlikely that fighters in Mali had the kind of weaponry that could shoot down a plane.

The official, not authorized to speak publicly, said on condition of anonymity that they primarily have shoulder-fired weapons — not enough to hit a passenger plane flying at cruising altitude.

Swiftair, a private Spanish airline, said the plane was carrying 110 passengers and six crew, and left Burkina Faso for Algiers at 0117 GMT Thursday (9:17 p.m. EDT Wednesday), but had not arrived at the scheduled time of 0510 GMT (1:10 a.m. EDT Thursday).

Swiftair said it has not been possible to make contact with the plane and was trying to ascertain what had happened. It said the crew included two pilots and four cabin staff.

“In keeping with procedures, Air Algerie has launched its emergency plan,” APS quoted the airline as saying.

The MD-83 is part of a series of long-range jets built since the early 1980s by McDonnell Douglas, a U.S. plane maker now owned by Boeing Co.