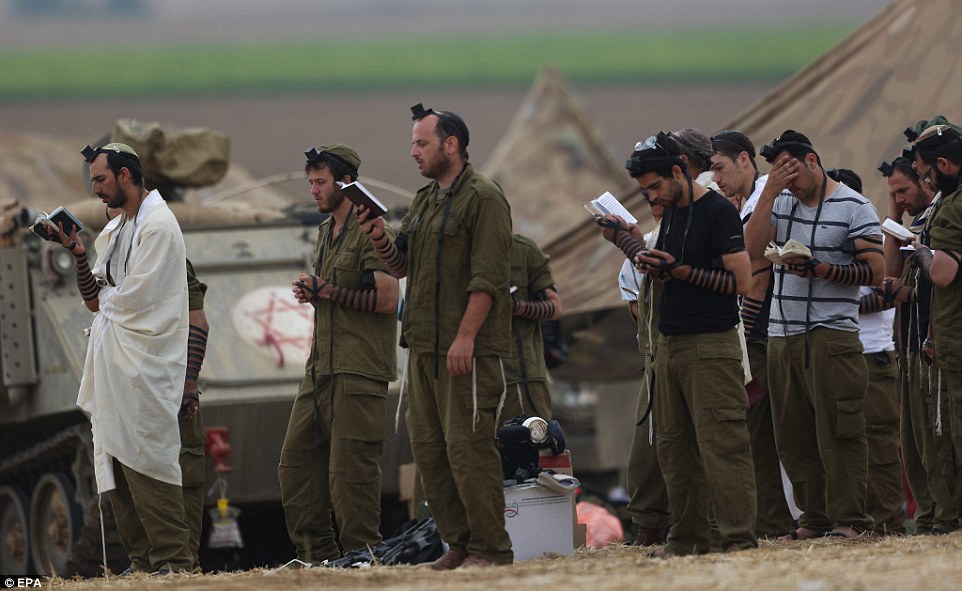 18:36: Channel 2 reports Defense Minister Moshe Ya’alon wrote the first letter in a Sefer Torah being written for the welfare and safety of IDF soldiers.

18:30: The Security Cabinet is meeting once again following a brief recess.

18:28: Hizbullah leader Sheikh Hassan Nasrallah announced “Just like in 2006, Israel used a kidnapping as an excuse to launch a war”.

18:24: A fire broke out in a nature reserve in the Eshkol Regional Council as a result of a rocket explosion.

18:22: There have been 48 rocket launches to Israel since Thursday night.

18:18: US Secretary of State John Kerry has delayed his Cairo press conference hoping to have a decision in hand from Israel’s Security Cabinet. The Security Cabinet, which convened in Tel Aviv earlier on Friday afternoon has just taken a recess.

17:40: Twenty-five soldiers remain hospitalized in Tel Hashomer. It is reported most are not in serious condition.

17:38: Lufthansa and Swiss Air to resume flights to and from Israel on Shabbos.

16:19: The Security Cabinet is convening in Tel Aviv at this time.

16:06: One rocket exploded in an open area in the Ashkelon Coast Regional Council a short time ago.

16:04: PA violence reported in the Hebron and Tulkarem areas.

15:11: The Iron Dome a short time ago intercepted five rockets over Ashkelon and Kiryat Malachi.

15:10: Paratroopers operating in Gaza encountered terrorists and opened fire, killing all six of them. B’chasdei Hashem none of the IDF soldiers were injured.

14:15: Two rockets landed in open areas in Ashkelon. B”H no fatalities or injuries being reported.

14:10: Two policemen have been wounded in clashes in eastern Jerusalem with Arabs in the Wadi Joz and at the Rockefeller Museum areas.

13:49: Arabs burning garbage bins and throwing stones in areas of the eastern capital.

13:48: It is permitted to report that IDF reserve duty soldier First Sgt. Yair Ashkenazi was killed during the predawn hours of erev Shabbos in northern Gaza.

12:36: A 65-year-old male was moderately injured as a result of being struck by a vehicle as he ran for cover during a siren in Rishon L’Tzion. The injured man sustained injuries to his pelvic region and his head. He was transported to Assaf HaRofeh Hospital in Be’er Yaakov

12:21: The World Health Organization is calling to open a humanitarian passage to permits evacuating the wounded from Gaza.

12:20: IDF Colonel (Reserves) Kobi Merom, a former commander of the Golani Brigade training base explains that stopping the operation at present would be an error. He feels that for as long as Hamas continues firing rockets at will, the IDF has not yet exerted sufficient pressure on the military wing to deter the attacks. The terrorists must be hit harder, until such time they decide attacking Israel is not a good idea.

Meron feels the cabinet must decide today to expand the operation included expanded aerial strikes. Meron states the northern border is quiet because Hizbullah was hit hard and that is Israel’s deterrence, not peace agreements. “For as long as Hamas calls the ceasefire shots it will not work. The organization must be brought to its knees until it begs for a ceasefire”.

12:13: The many erev Shabbos shoppers in the Carmel Shuk in Tel Aviv explain they will not be deterred by the rocket fire and they will continue shopping and doing what they have to do until the IDF brings a halt to rocket fire.

12:04: The Security Cabinet is set to convene at 13:30 erev Shabbos to discuss the ceasefire option as well as the option to continue the counter-terrorism offensive.

12:02: Four rockets were fired towards the center of country, two intercepted by the Iron Dome. There are reports of damage to vehicles from falling fragments. B”H there is no reports of fatalities or physical injuries.

11:58: Hamas claims to have fired three M75 rockets at Ben-Gurion Airport in the last wave of rocket fire.

11:48: Regarding the Ashkelon apartment hit by rocket fire earlier; B”H the family is in t he north to take a break from the war and no one was in the apartment that was hit. There are no immediate reports of injuries resulting from the last round of Gaza rocket fire.

11:39: Authorities have amended the initial report. A rocket from Gaza and not an Iron Dome fragment struck the Ashkelon apartment. Damage is significant. EMS is treating five victims of hysteria on the scene.

11:24: An Iron Dome fragment struck a third story apartment of an eight story Ashkelon Building. Damage is reported and people are being treated for hysteria. There are no reports of physical injuries.

11:19: The commander of Sayeret Maglan reports the amount of weapons and ammunition being uncovered in Gaza surpasses that which he has seen in 20 years of service. Maglan is an elite unit operating under the Paratroop Brigade.

11:05: Sirens sounding in the Eshkol Regional Council and Ashkelon district at this time

10:42: Over 3,000 Israelis remain stranded in Athens. Not all of them will be returned home to Israel before Shabbos as El Al does not have sufficient spare planes at this time of year, heavy travel season.

10:37: President Reuven Rivlin made a shiva visit to the family of fallen soldier 2nd-Lt. Bar Rahav (21), from Ramat Yishai.

10:27: The IDF Spokesman commends the public showing of solidarity and support for the soldiers in Gaza but announces the area where soldiers are living near the Gaza border is a closed military zone. Therefore, civilians are not to attempt to come that area.

09:58: US Secretary of State John Kerry has presented his new ceasefire proposal to both sides, Haaretz reports.

09:53: Police equipment and a substation on Har Habayis were set ablaze and destroyed in the Thursday night Arab rioting.

09:31: Soldiers of the Armored Corps found an entrance to a tunnel in Gaza. They encountered terrorists and opened fire, striking two of them. A booby-trapped building was also detected B”H. That building contained explosives and loaded rocket launchers.

09:27: The Kerem Shalom Crossing to Gaza is open today until 15:00 to permit bringing supplies into Gaza.

08:44: There are no injuries reported in the rocket attack to Ashkelon earlier this morning.

08:42: A senior Islamic Jihad commander and his son were killed along with a third person as the IAF targets their home in Gaza. Gaza reports ten injured on the scene as well.

07:04: Fearing widespread Arab violence, thousands of police are stationed throughout the capital today, the last Friday of Ramadan.

07:02: An IDF soldier was critically wounded and two others sustained serious injuries in fighting in Khan Yunis on Thursday night.

07:00: 36 Soldiers are being treated in Soroka Medical Center in Beersheva, with 5 listed in serious condition.

03:19: Palestinian Authority officials are calling for a “Day of Rage” across the West Bank later today.

01:52: There have been approximately 60 Palestinians injured by live fire at the Qalandiya checkpoint. Dozens more were injured by rubber bullets. The deaths were a 19 year old and a 27 year old Palestinians.

01:07: There are clashes being reported now at Kever Rochel. At least 1,000 are protesting. Numerous are reportedly injured.

01:02: Another Palestinian has reportedly been shot dead by security forces at Qalandiya. There have been three deaths reported so far. Hundreds are injured.

01:00: Al-Aqsa Martyrs’ Brigades are claiming responsibility for shooting at policemen in Qalandiya.

00:55: YWN has just published breaking photos from the clashes in Qalandia.

00:48: Palestinian media are reporting that a “state of emergency has been declared in West Bank hospitals after IDF opened fire towards protesters at Qalandia”.

00:46: 47 rockets landed in Israel on Thursday. 15 rockets were intercepted. The IDF attacked close to 100 terror targets in Gaza on Thursday, and more than 3,450 strikes since the launch of Operation Protective Edge.

00:45: U.S. Secretary of State John Kerry has drafted a new cease-fire proposal and presented it to both sides.

00:42: Israeli reporter Yoran Cohen is at the Qalandia checkpoint clashes and tweets that there has never been such a large crowd protesting in recent years, and the scenes remind him of the Intifada. Reporter Gal Berger says he has not seen such clashes since the days of the Intifada.

00:38: Police have arrested 20 Palestinians in the Old City in clashes with Israeli Police.

00:20: More than 100 Palestinians are reportedly injured in fierce clashes with security forces at the Qalandiya checkpoint.

00:07: Reports of clashes now in the Old CIty of Jerusalem between Palestinians and security forces.

00:05: Situation at at the Qalandiya Crossing north of Jerusalem is quite serious. More than 10,000 Palestinians are protesting, and the crowd seems to be growing. Large amount of security forces are being rushed to the scene.

00:03: Two policemen sustained light wounds from fireworks thrown during riots that broke out in the Temple Mount.

00:02: At least 10,000 Palestinians are clashing with IDF soldiers & border police in Qalandiya between Jerusalem & Ramallah. Reports of 2 killed and dozens wounded.

00:01: Labor Party head and opposition leader Isaac Herzog tells Channel 2 “there can be no ceasefire in the Gaza Strip as long as Hamas terror tunnels remain”.

UPDATE: 12:00AM IL: With the clock striking midnight on Thursday evening / Friday morning, Israel has now entered “Day 18 of Operation Protective Edge”. Stay with YWN as we continue our non-stop 24 hour news coverage – updated just seconds after an event occurs.