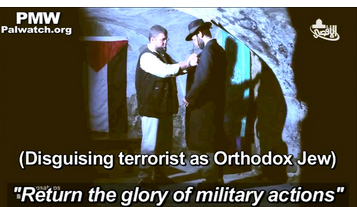 During the Gaza war, Hamas repeatedly broadcast a video promoting suicide attacks on Israeli civilians. The Hamas video shows a terrorist putting on a suicide belt and dressing up as a stereotypical, bearded Orthodox Jewish civilian, who is then sent to commit a suicide bombing.

The video demonizes Israel as an enemy targeting women and children and concludes that suicide terror will go on:

This is in addition to Fatah’s explicit calls to launch missiles towards Israel, as reported by Palestinian Media Watch.