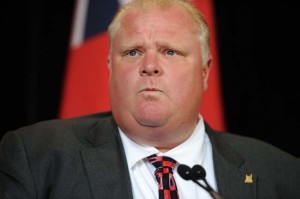 Toronto Mayor Rob Ford has gone public with a bomb threat that says City Hall will be blown up if he does not resign in 24 hours.

Ford returned to work June 30 after a two-month stint in rehab for drugs and alcohol. He admitted last year that he had smoked crack in a “drunken stupor.”

Ford said Monday he didn’t consult with police before going public with the email threat that was sent to his brother, city councilor Doug Ford. Rob Ford read and showed a copy of the typo-ridden email to reporters. He says he will continue with meetings at City Hall.

A Toronto Police spokesman says police are investigating. No evacuation has occurred.