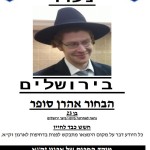 The search for missing Lakewood Yeshiva talmid 23-year-old Aaron Sofer continues in Yerushalayim, now in its fifth day. Aaron disappeared during an erev Shabbos afternoon hike in the Jerusalem Forest. The search on Wednesday 2 Rosh Chodesh Elul has been focusing on the Technological Park area near Ein Kerem near the agricultural school and the Pi Glilot area in Givat Shaul.

Zaka Operations Chief Chaim Weingarten told Kikar Shabbos that Zaka has been searching for Aaron since Friday, making today day six. He explains that while many view Aaron as being far from a professional hiker, they are expanding the search for they do not wish to leave any stone unturned on the small chance he covered more distance than believed. He explains that one possibility is that Aaron was the victim of a hit and run in the forest for there is a road running through it. He explains there are many paths and wells, demanding a painstaking search of a large area.

Weingarten adds that Israel Police and the ISA (Israel Security Agency – Shin Bet) are seeking to determine if Aaron was abducted. He was not carrying a cell phone and at present, there are no leads being reported. “If he was abducted we would expect to find eyeglasses or an article of clothing but this is not the case” adds Weingarten. Police officials state that at present, there is no evidence pointing to a terrorist abduction.

The tzibur is asked to continue davening for the safe return of Aaron ben Chulda.