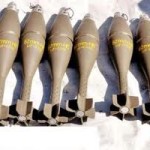 While the Gaza border remains quiet, rocket fire originated over the northern border, resulting in damage to vehicles near the Quneitra Crossing.

Three mortar shells landed on the Israeli side of the border on Wednesday morning 2 Rosh Chodesh Elul, resulting in damage to vehicles. In Israel, officials are announcing they regard the rocket fire as spill-over from the ongoing civil war in Syria and not an intentional attack.

12:59: It is now permitted to report that an IDF officer was injured by cross border gunfire from Syria earlier. The officer is reported in light-to-moderate condition, struck in his chest by gunfire. He was transported to the trauma center of Rambam Medical Center in Haifa by helicopter.

It remains uncertain if the gunfire and mortar rocket fire were an intentional attack or stray fire from the ongoing civil war.