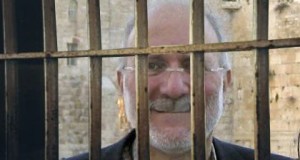 An attorney for a Maryland man who has spent over four years imprisoned in Cuba will argue before a federal appeals court that he should be allowed to sue the U.S. government over his imprisonment.

An attorney for Alan Gross, who was working in Cuba on a government contract when he was arrested in 2009, was expected to appear Friday before a three-judge panel of the U.S. Court of Appeals for the District of Columbia Circuit. A lower-court judge threw out the lawsuit against the government in 2013, saying federal law bars lawsuits against the government based on injuries suffered in foreign countries, but Gross’ lawyers appealed.

Gross was detained while working to set up Internet access as a subcontractor for the U.S. government’s U.S. Agency for International Development, which promotes democracy in Cuba. It was his fifth trip to Cuba to work with Jewish communities on setting up Internet access that bypassed local censorship. Cuba considers USAID’s programs illegal attempts by the U.S. to undermine its government, and Gross was tried and sentenced to 15 years in prison.

In 2012, Gross sued the government and the contractor he was working for, Maryland-based Development Alternatives Inc., for $60 million, saying they failed to give him adequate training and warnings before he undertook the risky assignment. The lawsuit did not say how much each party should pay or how Gross’ attorneys arrived at the $60 million figure.

Gross said in court in Cuba that he was a “trusting fool” who was “duped,” though documents filed in the case show he was aware his work in Cuba was dangerous.

“This is very risky business in no uncertain terms,” he wrote in one report on his work, and a 2012 AP investigation also found he was using sensitive technology typically available only to governments.

The Gross family settled with Development Alternatives Inc. for an undisclosed amount in May 2013.

U.S. District Judge James Boasberg threw out the lawsuit against the U.S. government that same month. That decision led to Friday’s appeals court hearing, during which Gross’ lawyer and the government will each have 10 minutes to argue their sides of the case.