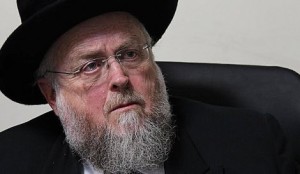 Another candidate has entered the Jerusalem Rabbinate race, Gilo Chief Rabbi and Jerusalem Religious Council posek Rabbi Eliyahu Schlesinger. Rabbi Schlesinger officially registered as a candidate to become the next Ashkenazi Chief Rabbi of the capital, running against the favored candidate, Rabbi Aryeh Stern. Rabbi Stern is backed by Jerusalem Mayor Nir Barkat and the dati leumi community. They are the only two running for the Ashkenazi post.

In the race for Sephardi Chief Rabbi the only registered candidate is Rabbi Chaim Amsellem. It remains to be seen if Rabbi Shlomo Amar will be entering the race and many believe will be the case.