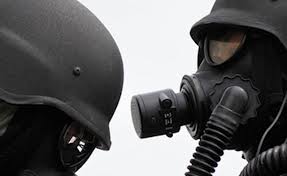 The report by the director of the Organization for the Prohibition of Chemical Weapons has been sent to the U.N. Security Council.

The council found rare agreement on Syria last year to unanimously approve the destruction of Syria’s chemical weapons program, a deal reached under threat of U.S. airstrikes after images of civilian victims laid out after an attack on a Damascus suburb shocked the world. More than 1,000 people are thought to have been killed. President Bashar Assad’s government denied involvement and blamed rebel groups.

A joint U.N.-OPCW mission has said the removal of Syria’s declared chemical weapons is complete, and they are now being destroyed. In June, Syria finished handing over to Western powers the 1,300 tons of chemical weapons it acknowledged possessing.

The U.N.’s mandate for the mission ended Tuesday, and the OPCW will handle work from now on.

The latest report by the OPCW director general, Ahmet Uzumcu, said that if explosives for a controlled detonation and contracts for services are supplied in time, work on destroying Syria’s chemical weapons facilities will begin this month.

Concerns remain that Syria has not made a full declaration of its chemical weapons. The United States has said it is worried that the Islamic State group, which has seized large parts of Syria, and other terrorist groups could get hold of chemical weapons if Syria is hiding any stockpiles.

The leader of the OPCW mission in Syria has said the global chemical weapons watchdog is still working with Syria to resolve discrepancies in its declaration.

Separately, an OPCW fact-finding mission said on Sept. 10 that it was virtually certain chlorine had been used as a chemical weapon in northern Syria this year. The mission did not assign blame for the attack, but British Foreign Secretary Philip Hammond said its findings “corroborate allegations that the Assad regime is continuing to use chemical weapons in Syria, in violation of the Chemical Weapons Convention.”

Both sides in Syria’s conflict, now in its fourth year, have blamed one another for using chlorine and other chemical weapons. The fighting has killed more than 190,000 people and sent millions fleeing into neighboring countries.