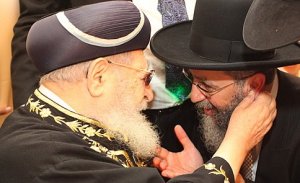 In light of the increasing turmoil and Arab violence resulting from increased Jewish activities to visit and daven on Har Habayis, Rabbi Dovid Yosef Shlita has called on Prime Minister Binyamin Netanyahu to close Har Habayis to all Jews.

A member of the Shas party Moetzas Gedolei Yisrael, Rabbi D. Yosef on Sunday morning 16 Marcheshvan sent a letter to the prime minister asking for the closure of the holy site to all Jews. In his letter he refers to the Har Habayis activists as “extremists” and their tefilos as “to’eva”.

In the harshly-worded letter, Rav Dovid Yosef addressed the prime minister on the topic, explaining Gedolei Yisrael headed by Maran HaGaon HaRav Ovadia Yosef ZT”L ruled one is forbidden to ascend to Har Habayis in our day and one transgressing is liable for kores Min Hatorah. He too, like Shas leader Aryeh Deri, equates visiting Har Habayis with intentionally eating on Yom Kippur, which also involves kores.

“Gedolim of the last generation including Rabbi Avraham Yitzchak HaKohen Kook ZT”L, the Chief Rabbi of Israel, published their ruling, stating one is absolutely forbidden from entering Har Habayis today.

Regarding those who visit Har Habayis, Rav Dovid adds “Entry to Har Habayis for tefilla as it were, is prohibited by halacha and one who davens, his tefilos are to’eva to Hashem are not welcomed but blasphemous and one who is guilty of this commits a major avreira”.

“In light of this” writes Rabbi Yosef, “I turn to you to close the entire Har Habayis area to Jews and visitors and not be fooled by a small minority of radicals and weirdoes making all sorts of messianic claims which is used in vein in the name of halacha”.

“Regarding those who visit Har Habayis stated Rav Yosef, “They cause a great deal of damage to the nation and those living in Tzion as well as provoking the nations and this will chas v’sholom lead to hatred. Their actions are used as an excuse by our enemies to justify striking out in murderous terror attack and to incite the entire world against us”.

Rav Yosef stresses some may view closing Har Habayis as relinquishing sovereignty so it is necessary to state emphatically this is not the case and we are not relinquishing our rights. Quite the contrary, entry to Har Habayis is prohibited because of its “awesome kedusha that exceeds the kedusha of all else”.

Rabbi Yosef concludes by stressing that such a move would enjoy the support of all the Moetzas Gedolei Torah as well as the Chief Rabbinate of Israel and the Chief Rabbinate Council. He calls for returning the sign that was placed on the site after it was liberated in the June 1967 war, that entry to visitors is prohibited.

“Certainly as a result of the situation that has developed, entry to Har Habayis leads to hatred against Israel, and we are compelled to inform the world Har Habayis is closed to Jewish visitors and it goes without saying that Jewish tefilla is prohibited on Har Habayis and by doing so you will be paid double by HKBH”.

In an effort to keep up the pressure on Prime Minister Binyamin Netanyahu regarding Har Habayis, Jordan’s King Abdullah announced he will not be participating in this week’s festive event marking 20 years since the peace treaty was signed between his country and Israel.