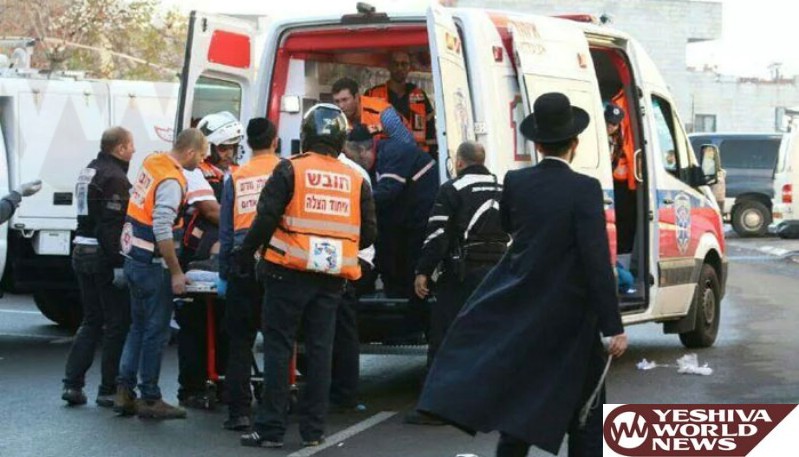 “We received four victims in serious condition, one of whom unfortunately died during the night. The other three were operated on during the late night and they are now in serious/stable condition”.

Dr. Shoshan added one of the three has regained consciousness and has begun speaking with doctors after being disconnected from an assisted breathing device. “He is still in shock. He does not stop speaking about what occurred. It appears the terrorist tried to strike victims in their heads [with their hatchets]”. He asked his family for his tallis and tefilin so he will have them in the morning to daven in his bed.

The victim who died during the night was Israel Police Master Sergeant Zidan Nahad Seif, 30, of the Druse community of Yanuh-Jat. He died of his massive head injuries during the night as he tried to stop the terrorists at the scene. His death brings the death toll in the attack to five.

Druse police officer Zidan Seif joined the Israel Police in April 2011 and served as a traffic control inspector in Jerusalem. He was one of the first two policemen to arrive at the scene and was shot in the head during a gunfight with the two terrorists who entered the synagogue and attacked mispallalim. He was posthumously promoted to First Sergeant. Despite the doctors’ efforts to save him, the critically wounded police officer succumbed to his wounds.

Druse community leaders and residents of Seif’s village of Yanuh-Jat in the Galil praised him as a hero. “We are proud of our sons who act fearlessly on the front against terrorist attacks,” said Muefek Tarif, a spiritual leader of the Druse community.

First Sergeant will be buried in his home village of Yanuh-Jat. He is survived by his wife and infant daughter, parents and five siblings.