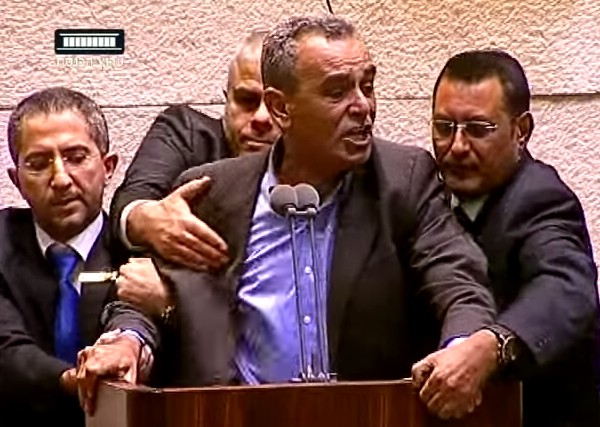 It began with a heated argument between Baraka and MK (Yisrael Beitenu) David Rotem during which the former told the latter “go choke’. Baraka then turned to Deputy Speaker (Likud) Moshe Feiglin who was chairing the plenum session shouting “go choke too”. Feiglin ordered Knesset ushers to remove Baraka from the podium. Opposition MKs were angered by Feiglin’s decision and expressed their disapproval of the move to oust Baraka.

“What right do you have to oust him” shouted Labor MK Shelly Yacimovich. “When [MK/Likud] Miri Regev speaks from the podium in Arabic and calls MK Zoabi ‘a traitor’ that is ok” added Meretz MK Ilan Gilon. Feiglin tried explaining that when an MK shouts at another “go choke” s/he cannot partake in the plenum session.

Zahalka, who was at the podium, did not just leave but got into a verbal confrontation with Feiglin, calling him “a fascist” and “a racist”. Feiglin instructed ushers to escort Mr. Zahalka out of the plenum session.

Minister (Likud) Dr. Yuval Steinitz added that after Zahalka was removed from the podium he called Feiglin a “neo-Nazi”. The Arab MK denied saying it.

Opposition leader Yitzchak Herzog from the podium expressed criticism against Feiglin’s stifling of freedom of speech. The mayhem continued for some time.