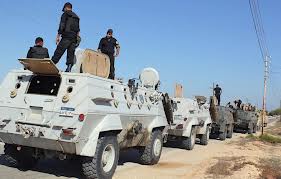 Egyptians are bracing for potential violence ahead of a planned major protest by Islamists calling for the toppling of the government, with security forces vowing to confront any unrest with “lethal force.”

The Islamists’ call for nationwide rallies Friday is the first attempt in months to hold large protests in the face of an overwhelming crackdown. It remains uncertain whether they will succeed in pulling large numbers into the streets.

The crackdown was launched after the military removed Islamist President Mohammed Morsi after protests against him last year.