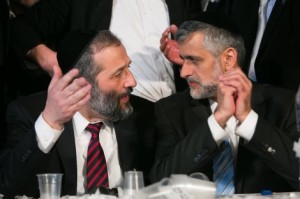 One of the prominent rabbonim believed to be a backer of Shas MK Eli Yishai announced on Sunday 22 Kislev that he is not endorsing any new party as he is hoping for achdus in Shas, not a split that results in a new political party.

The coming days are critical as it appears likely Yishai, a former head of Shas, will be leaving, possibly to quit politics and possibly to join another political party.

Yishai has been speaking with and meeting with rabbonim seeking support for such a move including HaGaon Binayahu Shmueli, Rosh Yeshivat Nahar Shalom. Rav Shmueli told the media he added his name to a letter circulated by HaGaon HaRav Meir Mazuz, seeking to strengthen Yishai’s position.

When asked on Sunday 22 Kislev, Rav Shmueli explained he seeks achdus in Shas and at present, he is not supporting any party. “I am a talmid of Moreinu Rosh Yeshivat Porat Yosef HaGaon Rabi Yehuda Tzadka and he was not connected to parties. That is true for me too…”

HaGaon HaRav Meir Mazuz Shlita appears will be a prominent rabbinical figure in a new party launched by Yishai should he opt to follow this route.