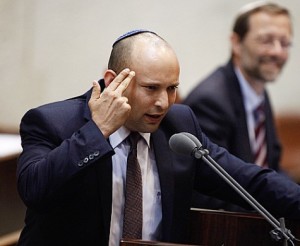 Bayit Yehudi leader Naftali Bennett met on Sunday 22 Kislev with Uri Ariel, who heads the Tekuma faction in the party. The two are on the verge of going separate ways and Bennett was hoping the meeting would result in agreement. It appears that Ariel is less than likely to remain in Bayit Yehudi amid growing differences in hashkafa as Bennett seems to favor the dati leumi light hashkafa while Ariel’s faction leans to the torani world and regularly consults rabbonim on major issues.

After the over two-hour meeting adjourned to two agreed to continue meeting, leaving Bayit Yehudi will hope that a deal will be reached to keep Ariel and his faction on board.