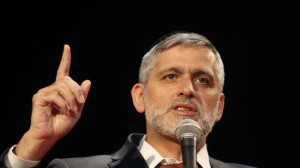 Former Shas MK Eli Yishai met on Tuesday evening 24 Kislev with Housing Minister Uri Ariel to determine if the two can work together. No agreement was reached but they described the meeting as good.

On Tuesday night, the new party’s rav HaGaon HaRav Meir Mazuz Shlita announced that he will not break from the tradition followed by chareidi parties and there will not be women in the lineup. This undoubtedly complicates things for Ariel for one of the members of his faction currently serving in Bayit Yehudi is Hebron resident Mrs. Orit Struk.