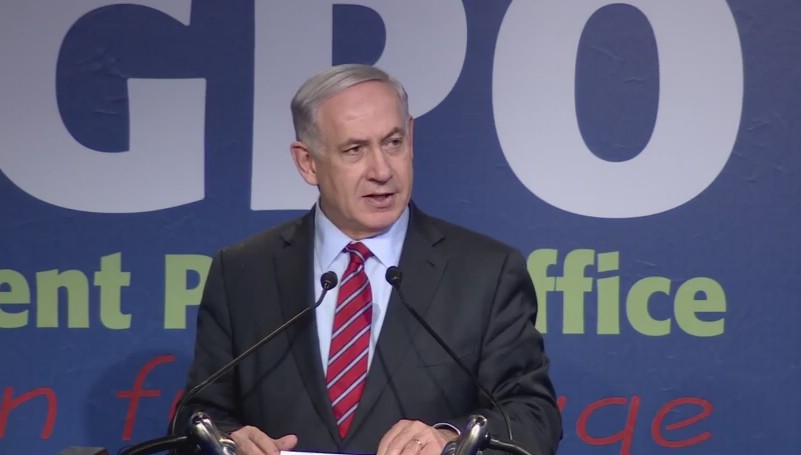 Today we witnessed a series of examples of European naivety, and may I add, hypocrisy: the decision of the European court in Luxembourg on Hamas, the resolution of the EU Parliament in Brussels on Palestinian statehood, and the call from Switzerland to investigate Israel for supposed violations of the Geneva Convention. Now all these point in the same direction. They point to a spirit of appeasement in Europe of the very forces that threaten Europe itself. Too many in Europe are calling on Israel to make concessions that would endanger not only the security of Israel, but also paradoxically, the security of Europe itself because Israel is the forward position of European civilization. Israel is the bulwark of European values. Israel is a pluralist, vibrant multi-party democracy.

In Israel there is equality before the law. The rights of all are vigorously protected – of minorities, of women, of gays, of everyone. Only in Israel. In Israel there is a true separation of powers. Our judiciary is fiercely independent and we’re proud of this. And you as journalists know something that applies to your profession: In a very, very large expanse, Israel is the only country in the Middle East and beyond with a truly free press. No one is incarcerated. No one is pressed. No one is harassed. You could write what you want. You do. You can say what you want. You do. And you can just about photograph anything you want and you do that too. Only in Israel and it stands in sharp contrast to what we see in the region around us, in the horrors that afflict human beings there, in the horrors that afflict journalists who cover these savageries.

Israel is an embattled democracy in a region plagued by totalitarianism, tyranny and Islamist terrorism; a region where human rights are trampled upon; where basic human freedoms ignored; where arbitrary violence is par-for-the-course. Israel is forced to defend itself against terrorists who time and again try to target our civilians. This summer they fired thousands of rockets on our cities and while they were doing this, these terrorists committed a double war crime. They deliberately targeted our civilians. That’s a war crime. And they used their civilians as human shields. That’s a second war crime.

Yet the focus in Geneva today was that Israel must be investigated for war crimes. What hypocrisy. What a travesty. I ask, where is elementary European integrity? Now I know that some in Europe say that they are frustrated with the situation in the Middle East. Well let me tell you a secret. We in Israel are frustrated with the situation in the Middle East. We are frustrated that our Palestinian neighbors refuse to recognize the right of the Jewish people to a state of their own at the time that they’re asking for us to recognize their right to have one. We’re frustrated that our Palestinian neighbors continue to incite against Jews and the Jewish state, creating a climate of hatred and violence. We’re frustrated that they refuse to negotiate seriously about our legitimate security concerns. And I think all of you know that in this part of the world, there can be no genuine peace without security for peace will not last if it cannot be defended.

The simple truth is that half of Palestinian society has been taken over by Islamist extremists who openly call for Israel’s destruction, while the other half refuses to confront the first half. So when Europeans say that they are frustrated, we say, “Join the club”. And I don’t believe that frustration can be an excuse for wrong policy. Removing the terrorist designation of Hamas is a grave mistake. Hamas is a ruthless terrorist organization with a proven track record of brutal terror attacks against innocent civilians – by the way, not only Israelis: hundreds, hundreds and hundreds of Palestinians who have been murdered by them. Just this year, Hamas kidnapped and murdered three Israeli teenagers. It launched thousands of rocket attacks indiscriminately at our children, at our civilians. And it celebrated just recently the murder of innocent worshippers massacred at a Jerusalem synagogue, and called upon its followers to commit more such terrorist atrocities.

Some erroneously believe that Hamas terror is a function of a failed peace process. Well, I will remind all of you that in the heyday of Oslo, when leaders across the globe were excited about the new momentum in the peace process, hundreds of Israelis were the victims of one of Hamas’s most brutal terror campaigns. Now, it was said then that Hamas uses terror to destroy the peace, and it is said now that Hamas uses terror because there is no peace.

Well, the truth is that Hamas uses terrorism against Israel because it’s a terrorist organization committed to Israel’s destruction. It’s as simple as that. That’s the nature of this organization and that’s its fundamental goal. Now if anyone had any illusions about that, you could hear one of the leaders of Hamas this weekend, Mahmoud al-Zahar. He reminded us that Hamas’s goal isn’t to rule over Gaza or to rule over Judea/Samaria in the West Bank. He said it clearly: Hamas’s goal is the total and complete annihilation of Israel and the murder of Israel’s citizens.

Well, do the self-proclaimed Palestinian moderates confront Hamas and the other Islamist extremists? Unfortunately, they often seem to be trying to compete with them over who can use the most inflammatory language and who can summon wells of anti-Jewish sentiment and anti-Israel sentiment. It was President Abbas himself who spoke seriously, slanderously of a Jewish threat to the Muslim holy sites. There is no such threat. We keep the status quo rigorously. That’s not going to change. We guard the holy sites of all the religions.

So to speak about our “attack” on the holy sites is not merely a lie, it’s just wrong. It’s wrong because it creates the wrong impression among Palestinian youngsters, among Palestinians at large and it produces these waves of attacks from people who seriously believe that we would destroy the al-Aqsa Mosque. There was just a poll taken in Palestinian society. About 90% believe, 85% believe that Israel seeks to achieve such a goal so this rhetoric has consequences. It forces a change in people’s minds and it forces radical and violent behavior. It has to stop. It was Abbas who actually called the Palestinians to use “all means” to fight this fabricated threat; and it was Abbas who accused the Jews of “contaminating” – that was his word – “contaminating” the Temple Mount.

Now, the question I raise for you tonight is where is Europe in all of this? Does it hold the Palestinian leadership accountable for its coddling of extremism? Does it demand that the Palestinian Authority break its signed pact with Hamas? Does Europe call for an end to outrageous official Palestinian incitement against Jews and the Jewish state?

The sad truth is that Europe is largely silent on these questions and when it raises its voice, it’s typically in the other direction. In fact, the European Parliament and some parliaments of EU member states have been calling for the recognition of a Palestinian state. And I ask you, why should the Palestinian leadership demonstrate responsible behavior? Why should the Palestinian leadership jettison its maximalist and extreme positions? Why should it abandon its call to flood Israel with millions of Palestinians? Why should the PA do any of this if its extremist and irresponsible behavior is rewarded time and again by European parliaments? Let there be no mistake: parliamentary recognitions do nothing to advance peace. Quite the contrary. These declarations merely reinforce Palestinian intransigence, pushing peace further away.

And the point that I came here tonight to make, this is the point I close with: There is a simple truth that cannot be ignored. Peace will only come when the Palestinians are willing to confront their own extremists. Instead of embracing the militants, the PA should fight them. And instead of rewarding Palestinian intransigence, the European democracies should support the one and only democracy in the Middle East and that, ladies and gentlemen, is the State of Israel.