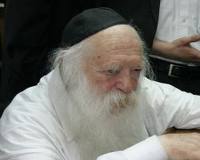 The article cited the Chebiner Rav who responded in writing to a shadchan who conveyed such a request with a message to the other side, “Lo y’aseh kain bimkomeinu, lasais haTzurah lifnei haBechira.. – This shall not be done in our place, to give the Tzurah [the appearance of the girl – i.e. a photograph = pronounced BTW in the Chasidish havarah as Tzirah] before the Bechira – (Chassidish pronounciation for Bachura) the young lady.” The Chebiner devised a clever play on words using Tzurah – photograph, instead of Tze’irah – younger one referencing Lavan’s response to Yaakov Avinu in Bereishis 29:26, however, he did respond with a very clear message: This is clearly not something that Jewish people should be doing and is very far from the Torah way of life.

The article further explained that such a request demeans and cheapens the young lady under discussion. Each human being was created in the Divine Image, and to debase a Bas Yisroel in such a fashion runs counter to many fundamental yesodos in Yiddishkeit.

Finally, the article cited a few contemporary Poskim: Rav Dovid Feinstein shlita, was not happy when he heard of this growing practice and responded, “Why are we making things more difficult? There is a certain chein that young ladies have that often does not come across in a photograph, and can only be seen in person. We are making the shidduch crisis worse with these new requirements.” He did not forbid it from a halachic perspective, but he was clearly very much against it. Rav Moshe Heinemann, Shlita of Baltimore, when consulted by this author on the question, responded, “I do not think that it is within the framework of tznius for a girl to give a picture out where others can possibly see it. This is not with the ruach of Torah.” Rav Shmuel Fuerst, a Dayan in Chicago stated, “This wasn’t the mehalech for doros, and I think it is lacking in tznius. I don’t think it is a proper hanhagah and, besides, a picture can be very deceiving.”

So what did Rav Chaim say?

Is it proper for a Ben Torah, before he dates a girl for shidduchim, to ask the shadchan for a picture of the girl so that he can determine whether he will find her attractive? His reasoning is so that it will save him time. Is this an inappropriate thing for a Ben Torah or Ben Yeshiva to do? Perhaps also a girl has a certain type of beauty that is not found in a picture.

Rav Chaim responded, “This is nonsense! He will not see anything [through the picture]. One must meet [her]!

Rav Chaim is clearly characterizing such requests as foolishness.

After the article on the proliferation of picture requests first appeared, this author was approached by a number of young men who rationalized the practice by explaining how asking for a picture had saved them countless hours. They explained that the average date now costs some $150, to say nothing of the 3 and ½ hours spent in traffic – aside from the date itself. The bitul Torah is enormous.

In response to this valid point, I would like to humbly suggest a slightly different modality to the entire shidduch scene. Let us recall the Gemorah in Brachos (60b). Rabbi Akiva tells us to be accustomed to say, “kol d’avid rachmana l’tav avid – All that the Merciful One has done He has done for the good.”

Instead of looking at dating to be an utter waste of time and Bitul Torah, why don’t we look at dating as an opportunity to perform a DeOraisah Mitzvah – of V’ahavta l’rayacha Kamocha? Seriously, many, many shidduchim have been brought about through peer to peer initiation – through a shadchan, of course. So why not here as well? Every bochur has friends or acquaintances that might be a perfect fit for the young lady that is currently in the car with him on this “waste-of-time” date. Let us also remember that the Mitzvah of v’ahavta l’rayacha kamocha also applies to the young lady whose resume we have just perused and actually considered to be our spouse. We have here an opportunity to a] look out for a shidduch for our friends, b] look out for a shidduch for this young lady, c] do a chessed for her parents in finding their daughter someone and d] possibly, possibly, she may have someone for the the young man dating too. Let’s think about it. Purim, Chanukah, 7 out of 8 days of Lulav and Esrog, these are all Derabanan Mitzvos. There are four recipients of Chessed here. When else do we have an opportunity to fulfill four full-fledged Torah Mitzvos at one shot?