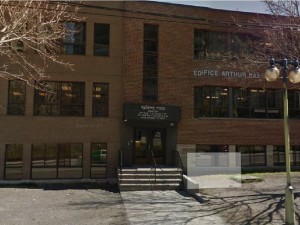 The following incident should be about how a Yeshiva building is supposed to remain locked from any intruders. The article is via the Montreal Gazette:

Draped in a flag of Quebec, a middle-aged man tried to enter an ultra-Orthodox Jewish day school on Tuesday, claiming he wanted to ‘liberate’ its students.

The man drove up to the Yeshiva Gedola school on Deacon Rd. in Park Extension in a PT Cruiser, and rang on the intercom of the daycare run out of the building, said Rachel Schecter, the director of the public Centre de la Petite Enfance.

“(My staff) came to get me to say there was someone very strange at the door,” Schecter said. “When I answered through the intercom, the man told me: ‘I want to talk to the children because they are imprisoned in this school.’ He was speaking perfect French. He didn’t sound drunk or anything.”

Schecter said she called police because she didn’t know the man’s intentions, or whether he was carrying a weapon.

“He told me: ‘I want to liberate the children. If you don’t let me in, I’ll protest on the sidewalk.’ ”

She told the man he could not enter because he was not a parent of a child at the school. He then walked away.

Schacter said the man didn’t appear to have evil intentions, but seemed to be concerned about the children who were attending the school.

“I realized it was Holocaust memorial day (on Tuesday), and in his warped way, he wanted to liberate the children, (like the Jews were liberated from the Auschwitz concentration camp),” Schacter said.

Rabbi Yehuda Gottesman, the executive director of the school of 400, said there is already a good security protocol in place, and Tuesday’s incident shows that system is working well.

Police were called in, but no one has yet been arrested in connection to the incident, a spokesperson for Montreal Police said.

Gottesman said this is the first such incident at this school. Parents were concerned after hearing about the incident, and Gottesman said there were many frayed nerves, as rumours began swirling that the man had gained access to the building. He said the community is on edge after anti-Semitic incidents that have occurred in France in recent weeks, including the killing of four hostages at a Jewish supermarket by one of the suspects of the Charlie Hebdo shootings, two days after that attack.

“When you hear these stories in Europe, I think we’re all afraid,” he said.

Eta Yudin, the associate director of Public Affairs for the Centre for Israel and Jewish Affairs, Quebec, said Montreal’s Jewish community always has good security measures in place at its schools, and neither this incident nor the events in Europe have triggered heightened alerts.

“We have no reason to believe that additional measures are required at this point,” Yudin said.