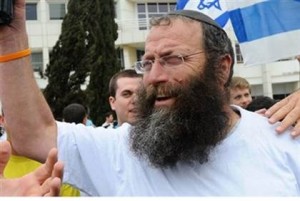 When Baruch Marzel arrived with others from the Yachad/Otzma Yehudit list to submit the final lineup on Thursday night 9 Shevat, he refused to shake the hand of the head of the Central Election Committee, retired Justice Salim Jubran.

Marzel explained to the media that his reason is simple, reminding Israelis that as a Supreme Court justice and during his career, Jubran used every opportunity to come out against Israel and the IDF. Jubran created a media storm back in 2012, when he, a high-level official, refused to sing the Hatikvah national anthem.

For Marzel, it was not about a simple handshake but standing firm on principle against such an individual, despite his official position. Marzel exclaimed that he is not in the habit of shaking hands with people that are against us, the People and State of Israel.

After Yachad party leader signed a deal with Otzma Yehudit, Marzel is on the fourth slot and if the party passes the minimum threshold, will serve as an MK in the 20th Knesset.