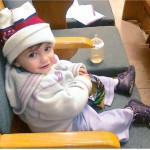 With less than three hours to the scheduled levaya of Adele Biton HY”D, the family and community officials report the kvura is set to take place in her home community of Yitzhar, in Shomron.

Gershon Mesika, who heads the Shomron Regional Council, explained earlier on Wednesday morning 29 Shevat that the rav of the community opened the beis hachaim with a minyan and the kever for Adele is ready. The problem is the IDF Central District Commander and the Defense Ministry have to approve the opening of a cemetery and the permits have not yet been issued.

Mesika told Kol Chai Radio that the kvura will take place in the community B’ezras Hashem, with or without permits, stressing no one is seeking a confrontation with the IDF or any other government agency and he hopes the government will permit this grieving family to bury their daughter in the community that was the only home she ever knew.

5-year-old Adele was niftar on Tuesday in Schneider Children’s Hospital due to complications from pneumonia. Her weakened state was severely compounded by her condition, which resulted from the rock-attack that caused the family vehicle to smash into the rear of a parked truck, leaving Adele in critical condition a number of years ago. Since that day, her life has been hospitalizations, surgery, and intensive rehabilitation.