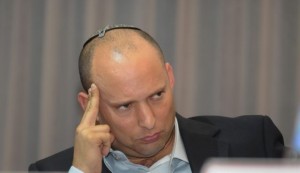 In response to the Yachad party’s growing support in the dati leumi community, Bayit Yehudi is distributing a new pamphlet written by rabbonim who support the party. The message sent to readers is a simple one, that Bayit Yehudi has never operated with such an attentiveness to rabbonim in an effort to portray the party as being more religious than in the past.

The rabbonim address accusations that the party under the leadership of Naftali Bennett is as religious as it should be. They state that the contrary is true, that the party is more religious and connected to rabbonim than any time in the past.

On the other side of the dati leumi coin, Rabbi Shlomo Aviner is distributing his new pamphlet which is against Bayit Yehudi but in support of the Yachad party.