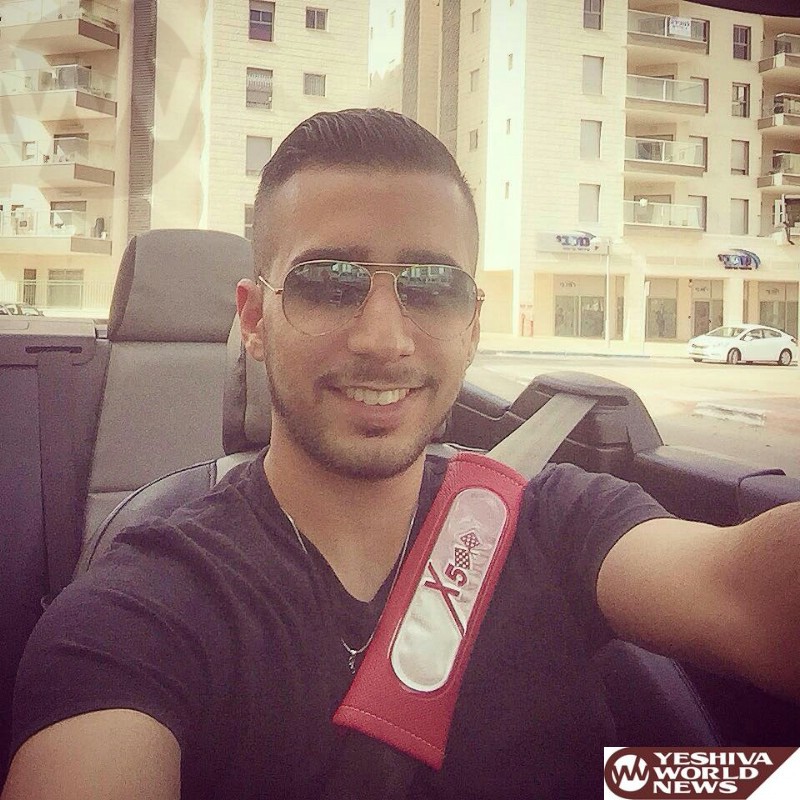 FINAL UPDATE: After 10 hours of intense searching for the missing man, the IDF spokesman annonced that he was found alive in Kiryat Arba. After Israeli security forces searched the Hebron area for him for 10 hours, 22-year-old Niv Asraf from Be’er Sheva, who was feared kidnapped, was found alive in Kiryat Arba on Friday overnight. IDF Spokesman Moti Almoz said Asraf’s soldier friend fabricated the kidnapping.

21:03: The search is ongoing. The IDF has already given the order via the chain of command. The operation will continue throughout the night, erev yomtov, yomtov and for as long as it takes until the young man if found. Simultaneously, the investigation is now focusing on the fact the young men entered the village in connection to criminal activity, which has since become a nationalistic attack.

20:43: Meir, a cousin, tells the media he does not know anything more than we are all learning from the IDF and police officials. The massive search continues and it has actually expanded to other areas.

20:28 Channel 2 News: While the incident may have begun as a criminal incident, it has since turned into a nationalistic attack.The name of the missing man for Tehillim is Niv ben Yael. Meir, a cousin of the missing man calls on the tzibur to daven hard for his cousin as “We burn and rid ourselves of our chametz”. He adds that Niv told his mother earlier in the day that he is traveling to Hebron to daven in the Machpelah.

20:26: The following was posted on the missing man’s Facebook page on Wednesday, 12 Nissan: Why is it that only when we lose someone do we understand how important he was to us and just how he was an integral portion of our life… looking back, we understand we are choking a flower – which at the end dies between your hands. They say that we learn from our mistakes and he who said it was correct. Only he forgot to mention that after mistakes, someone has to give a second chance

20:20: Many avenues are being probed in the ongoing investigation into the disappearance of the 22-year-old Beersheva resident. Police are now dumping the missing man’s phone, which he left behind in the vehicle. Simultaneously, the Israeli Bedouin friend is being interrogated as police are trying to determine why the man entered Beit Anoun. Relatives are gathering in the Beersheva home of the concerned family as the missing man entered the village over four hours ago. What police have already learned is the missing man this morning began a new job with JNF. Police remain in the fog as why he and the friend traveled to the area and then he entered the village. One of the avenues being probed is a possible drug deal.

19:41: Police reporting the statements provided by the missing man’s friend are contradictory. Police report they were unable to determine the vehicle in question had any flat tire as reported. The search is ongoing along with intelligence gathering efforts as authorities are trying to get to the facts by questioning the friend.

19:17: Roadblocks have been set up as far north as Halhul and near Banei Naim southbound. PA (Palestinian Authority) forces report they are clueless and PA intelligence is unable to assist Israeli forces.

While the search is based on the premise the man was abducted, this has not yet been confirmed.

19:15: The friend of the missing man told authorities they arrived in the area to daven in the Ma’aras HaMachpelah.

Authorities are questioning why they were traveling north of Hebron when the way home to Beersheva is to travel southbound on Route 60. It is possible they were heading to Jerusalem which is north of Kiryat Arba but what is for certain is police are no longer buying the story about a flat tire, which has not yet been disproven entirely but are trying to determine if there are different circumstances surrounding the man’s disappearance.

19:14: It is being reported the missing man is familiar with the area from his army service days.

There are reports of rock-throwing attacks against IDF and police forces involved in the search.

19:02: The search continues as officials are trying to understand what is taking place. Police report the young man called at about 16:00, explaining that his friend entered the village seeking tools to change a flat tire. It now appears there was no flat tire.

Hence, officials are trying to understand why the young man entered the village, without his phone. It should be pointed out he did not enter the village via a main road, but walked up a difficult mountainous path.

What is not visible to the cameras is the intelligence aspect of this operation as the ISA (Israel Security Agency – Shin Bet) and other units are speaking with Arab residents of the areas and using their resources in an effort to learn what occurred and where the missing man is. Elite forces are standing by in the area ready to respond if and when given the word as soldiers continue to arrive in the area for the widening search.

18:45: A large number of military vehicles are heading south from Jerusalem to the Hebron district as the search for the missing 22-year-old Beersheva resident continues. It appears the search now includes Halhul, an extremely hostile PA (Palestinian Authority) village north of the area where the man disappeared, closer to Gush Etzion.

All vehicular traffic in the area of the village is being halted as the ISA (Israel Security Agency – Shin Bet) is beginning to instruct soldiers to conduct a house-to-house search.

18:41: The friend at the vehicle does not have an explanation as to why the young man decided to enter the Arab village without taking his cellular telephone.

The area of the search is closed down. Traffic is heavy on Route 60 in that area as many military vehicles are responding and operating, and vehicles are being stopped for inspection. The search has already widened to areas other than the village on the chance the young man was abducted and moved from Beit Anoun.

Civilian security officials and area guides who are extremely familiar with the area are already working to assist security forces in the chance.

Just three weeks ago the IDF held a major training exercise that included many scenarios including how to respond and act following a possible abduction.

18:38: A large IDF force is operating in Beit Anoun at this time. The young man left his friend and their vehicle that had a flat at about 15:30. He entered the Arab village seeking a wrench to change the flat tire. The friend, who called police at about 16:00, has not heard or seen from the friend since.

The military now fears the young man, a resident of Beersheva, was abducted. Needless to say the incident has lit red lights with IDF and Israel Police commanders who are assuming the worst chas v’sholom and they are not taking any chances.

18:26: The area where the man disappeared has been shut down by security forces. The missing man is reportedly a resident of Beersheva. A gag order is in place as the military and police seek to seal the area fearing the man was possibly abducted and kidnappers may try to flee the area. The man has been missing for about three hours.

18:23: Shortly after 16:00, the Israel Police dispatcher received a call from a man who reported they got a flat in the Kiryat Arba area. According to the friend of the missing man, he called the police dispatcher about a half hour after the missing man entered the Arab village of Beit Anoun seeking a wrench to change the tire on their car. He adds the missing man left his cellular telephone on the seat of the car so he cannot communicate.

While the search is taking place, there is no unusual activity being reported inside Beit Hanoun. The search is concentrated on the wadi near the area where the car got a flat tire.

18:21: A massive search is underway for the missing 22-year-old who seems to have disappeared near the Arab village of Beit Hanoun as he went to get tools to repair a flat tire. While no official announcement has been made, it appears the IDF and Israel Police are operating on the assumption the young man was kidnapped.

18:15: Police and IDF sources are involved in a search for a youth reportedly missing in the Kiryat Arba district, near Beit Anoun. According to the missing person’s friend, he went to bring tools to repair a flat tire and he has not returned.

It appears the IDF has placed a gag order on the release of information as one of the fears is that the missing person was abducted.