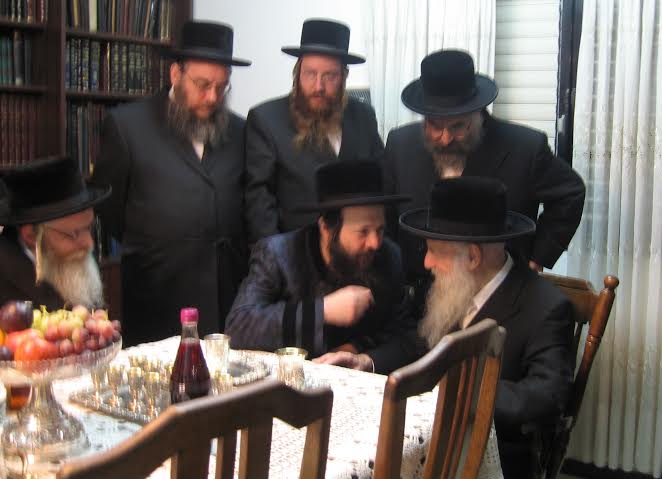 Almost one year ago to the date, the Bobover Rebbe 45, Rabbi Mordechai Dovid Unger, established the “Haim Chayeinu” study Chaburah. Yesterday, they celebrated the completion of their third tractate of the Talmud. The Rebbe spoke on Chol HaMoed Pesach to help strengthen Torah learning.

The Rebbe spoke about the tremendous loss of great Gaon, the author of the Shaivet HaLevi. He explained, “During the Pesach season it is not the proper time to conduct a eulogy, however, when there is a possibility of learning a dvar mussar – I must point it out.” The Rebbe continued with how Rav Wosner zt”l could inspire us all and what we can all learn from his derech.

He said, “On the eve of the holiday, the nation of Israel lost the Gadol HaDor, the Gaon HaRav Shmuel Wosner, who was accepted as the leading halachic authority of the generation. Even though now is not the time to eulogize – there is one point I wish to make. When this Torah giant was a youth, he was not particularly talented. Rather, he broke himself and studied with remarkable diligence in an awe-inspiring manner. Now see what became of it – He became the leading Rabbi of the generation, great in Torah, great in fear of Heaven, great in character traits, a remarkable influence on others. What benefit is there for a man when he toils hard under the sun? When he toils in Torah, the Holy One pays him back. This mussar lesson is what I wish to point out to you.”

The Rebbe concluded with a blessing, “May Hashem assist that he (Rav Wosner) be a meilitz Yosher for the nation of Israel. And I wish to bless his son, HaGaon Rav Chaim Wonser Shlita, my mechutan, who was appointed in his father’s place. May he succeed, and be granted long life in his role of leadership – he and his sons, among Israel.”