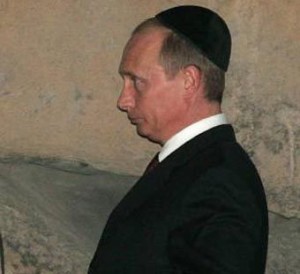 A Brussels-based European Jewish umbrella organisation has launched a campaign which calls on Europeans to wear a kippah, the traditional Jewish skullcap, and other Jewish symbols to fight rising anti-Semitism on the continent.

They are being asked to film themselves walking down the street to show their opposition to rising anti-Semitism.

“The idea is to get as many non-Jews as possible to wear Jewish symbols and show solidarity, and that they are a part of the silent majority that is not anti-Semitic. The idea is to do like the ice bucket challenge and get thousands to publish the videos on Facebook and Twitter,” said Rabbi Menachem Margolin, Director General of the European Jewish Association, a federation of Jewish organisations active on European level.

“It only takes a minute. Just upload a video of yourself walking 10 meters in your neighborhood wearing a kippa or other Jewish symbol and announce ‘I too will proudly join the initiative to increase awareness,’” said one young woman in one of the promotional videos produced by the EJA. Israel’s Chief Rabbi, David Lau, also call on both Jews and gentiles to challenge five friends to take part in the campaign and post their videos on Facebook and Twitter. When a Jew sees that “his neighbor identifies with him he will feel more secure,” Rabbi Lau said in his video promoting the campaign.

According to Margolin, the campaign will “make sure that people have an opportunity to show solidarity” and that at the end of the day “the majority of people in Europe” is against anti-Semitism.

When a Jew sees that “his neighbor identifies with him he will feel more secure,” Lau said in his video promoting the campaign.

Earlier this year Rabbi Margolin slammed a call made by a German Jewish leader who suggested that Jews should avoid to wear the kippah in areas with large Muslim population. “The call for Jews to hide their identity instead of calling upon European governments to provide all the necessary resources in order to battle anti-Semitism is irresponsible,” he said.

In 2012, after a brutal attack against a rabbi in Berlin, several dozens of residents marched in the city center in solidarity with the local Jewish community,many of them donning kippot.