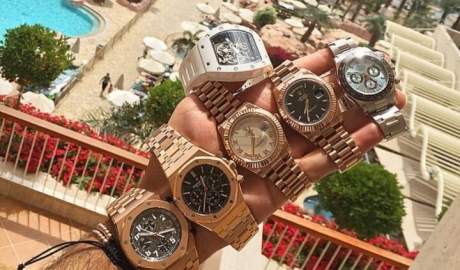 Israel Customs Authority inspectors were quite busy before Pesach. During Chol Hamoed inspectors received information that a resident of Belgium who has dual citizenship and is Israeli was staying in an Eilat hotel. The inspectors learned that he smuggled a number of high end watches into the country to sell for profit, primarily to wealthy tourists. He did not pay the required customs taxes on these watches.

Beersheva District value added tax and customs inspectors visited Eilat during the week-long yomtov to continue their investigation. They found six very expensive watches in the man’s hotel room, including Rolex and Richard Mille valued from tens to hundreds of thousands of dollars. They also found €23,000 in cash.

So how did the inspectors learn about the watches? It was the man’s own advertisement that did him in as he uploaded a photo to Instagram which showed enough of the hotel in the background for inspectors to track him down.

Eilat Magistrate Court Judge Ido Rozin released the suspect on bail. He may not leave the country as the investigation against him continues. At least one of the watches were sold before inspectors tracked him down and they are now working on tracking down the buyer.