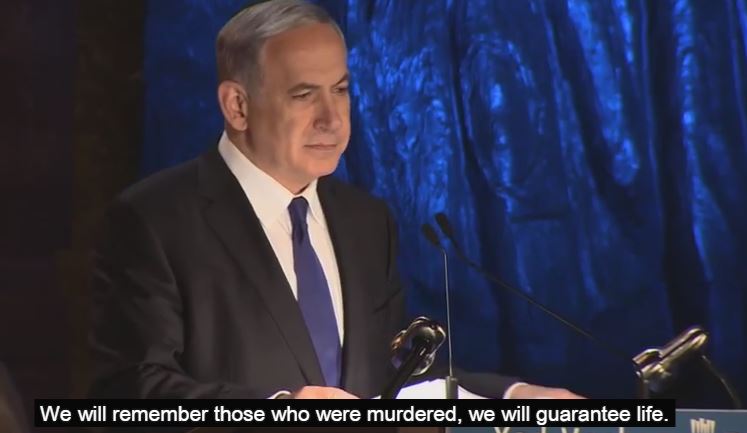 Prime Minister Binyamin Netanyahu addresses the Official Ceremony Marking the Commencement of Holocaust Martyrs’ and Heroes’ Remembrance Day at Yad Vashem. The address was given on Wednesday evening the eve of 27 Nissan 5775.

As expected, the prime minister focused on the current Iranian threat, drawing the analogy from the Holocaust and how the international community failed to act properly, leading to the catastrophic results.

Mr. Netanyahu warns the international community and calls on world leaders to take the necessary measures to prevent Iran from becoming a nuclear threat, promising Israel will remain firm and will do whatever is necessary to prevent another Holocaust.

Sadly, the mention of HKBH in any way whatsoever is painfully absent as the leader of the State of Israel is oblivious to the need for Siyata Dishmaya for the nation’s continued existence.

Seventy years ago, the bells of freedom rang in the free world. The horrific nightmare that had engulfed all humanity in the depths of blood had come to an end in Europe. But the day the Nazis were vanquished was not only a day of relief and jubilation. It was a day of great sorrow for our nation, but also a day of reflection for world leaders. Leaders of modern countries realized that it was a propitious time to establish a new world order based on defending liberty, eradicating evil and opposing oppression. They articulated the most important lesson of World War II: democracies must not turn a blind eye to the aspirations of tyrannous regimes to expand. A conciliatory attitude toward these regimes only increases their tendency for aggression. And if this aggression is not stopped in time, humanity might find itself in a much bloodier battle.

In the years before World War II, the free world tried to appease the Nazi regime, to gain its trust, to curry its favor through gestures. There were those who warned that this compromising policy would only whet Hitler’s appetite, but these warnings were ignored due to the natural human desire for calm at all costs. And indeed, the price was exacted not long later, and it was too heavy to bear – six million of our people were slaughtered in the Holocaust, and dozens of millions of others were killed in this terrible inferno.

When the war ended, the conclusion was clear: there is no room for weakness when facing tyrannous regimes who send their murderous tentacles in every direction. Only by standing firm and adhering to the values of liberty and tolerance can we ensure the future of mankind.

There are many around the world who claim that the lessons learned then are still valid today. They affirm: “Never again!” They declare: “We will not turn a blind eye to the expansion intentions of a violent tyranny.” They promise: “We will oppose evil things as soon as they begin.” But as long as these announcements are not backed with practical actions – they are meaningless. Did the world really learn a lesson from the inconceivable universal and Jewish tragedy of last century? I wish I could stand here and tell you that the answer to this was yes.

Today, evermore threats challenge the human civilization. Radical Islamic forces are flooding the Middle East, destroying remnants of the past, torturing the helpless, murdering innocents. They hope to establish caliphates, more than one, like in the Middle Ages. At the same time, the extremist regime in Iran is oppressing its people; it is rushing forward and submerging the Middle East in blood and suffering – in Yemen, in Syria, in Lebanon, in Iraq, in Gaza and across the border of the Golan.

Just as the Nazis aspired to crush civilization and to establish a “master race” to replace it in controlling the world while annihilating the Jewish people, so too does Iran strive to gain control over the region, from which it would spread further, with the explicit intent of obliterating the Jewish state. Iran is advancing in two directions: the first is developing the ability to arm itself with nuclear weapons and accumulate a stockpile of ballistic missiles; and the second – exporting the Khomeinist revolution to many countries by heavily using terrorism and taking over large parts of the Middle East. Everything is out in the open – it is all taking place in broad daylight, in front of cameras. And yet, the blindness is immense.

“For, behold, darkness shall cover the earth, and gross darkness the peoples,” said the Prophet Isaiah. The determination and lessons that were acquired in blood seventy years ago are now dissipating, and the darkness and fog of denying reality are taking their place. The bad deal that is being made with Iran demonstrates that the historic lesson has not been internalized. The West is yielding in the face of Iran’s aggressive actions. Instead of demanding a significant dismantling of the nuclear program in Iran – a country that clearly states its plans to exterminate six million Jews here and elsewhere, to eradicate many countries and many regimes – the superpowers back down. They are leaving Iran with its nuclear capabilities, and even allowing it to expand them later on, regardless of Iran’s actions in the Middle East and around the world.

As the civilized world is lulled into slumber on a bed of illusions, the rulers of Iran continue to encourage subversion and terrorism, and disseminate destruction and death. The superpowers turn a deaf ear to the crowds in Iran shouting: “Death to America; Death to Israel.” They turn a blind eye to the scenes of execution of those who oppose the regime and the members of minority populations. And they hold their peace in the face of the massive arming of terrorist organizations. At the most, they make a halfhearted statement for the record.

I looked into it and found that in honor of the Memorial Day of the Holocaust of our people, a competition with prizes is soon to take place in Tehran with participants from 56 countries. It is a competition of illustrations dealing with the denial of the Jewish Holocaust. Will we hear protests? At best, a minor condemnation might be heard, that will minimally fulfill their obligation.

Distinguished guests, Israeli citizens and representatives of other countries who are with us, the bubble of this illusion is going to burst. Democratic governments made a critical mistake before World War II, and we are convinced – and I must say that many of our neighbors are too – that they are making a grave mistake now too. It is possible that this partnership with many of our neighbors, the partnership in identifying threats, is the foundation for the partnership in forging a better, safer and more peaceful future in our region. Meanwhile, we will not flinch. We will continue to insist on the truth, and we will do everything we can to open the eyes that have closed.

I do not want to mislead anyone. We have tests ahead of us. We are in the midst of a great battle against the languor, the weakness, the denial of reality – we will stand in full force.

Beside those who refuse to understand our position, there are many others who identify with us. But even if we are compelled to stand alone, we will not be afraid. In any scenario, in any situation, we will safeguard our right, we will maintain our ability, we will keep our resolve to defend ourselves.

Seventy years ago we were a people of war refugees, powerless and voiceless. Today we express what we have to say, and we are determined to guarantee our existence and our future. It is our duty to fight those who wish to destroy us, not to bow down to them nor to downplay reality. We will not allow the State of Israel to be a passing episode in the history of our nation.

Distinguished guests, today I met in my office an 85-year-old Holocaust survivor, Abraham Niederhoffer. Abraham was born in Romania. When he was 12 years old he witnessed the brutal murder of his relatives by a Romanian soldier. He was taken on an animal freight train to the Ukraine, where he survived the Holocaust. Due to the persistent refusal of the communist authorities in Romania to permit his emigration, he came to Israel only in 1969. Here he worked as an engineer and supervisor, contributing to the building of the country. He told me his story with great emotion, so much so that he had to pause several times. At the end of the meeting he beseeched me, “Prime Minister,” he said, “it is your duty to prevent another holocaust.” And I responded: “That is exactly how I see my responsibility, that is exactly how I see my responsibility.”

Seven decades ago, the survivors emerged from the camps, from the forests, from the March of Death, all battered and bruised with nothing but the worn-out clothes on their backs. Upon their release, the prisoners of the camps from all nations were asked by the Allied soldiers where each one wished to go. The Poles returned to Poland; the Russians returned to Russia; the Hungarians – to Hungary; the Ukrainians – to the Ukraine. But a great many of them had nowhere to return to. They stood hopeless, because they did not have their own country.

Today, we have our own country – a flourishing and modern country. A country that imbibes the heritage of our fathers and stands at the forefront of global knowledge. A country that disseminates a great light. A country that has taken charge of its destiny. Seventy years after the valleys of death, we revere the living, the vibrant, the creative, the flourishing.

Israel breaks ground on every front of modernization – in science, medicine, technology, agriculture, education and culture. And we do this not only for our people. We do this for the benefit of all humanity. This is what our existence is based upon – on our commitment to the safety and future of Israel, on the deference to our heritage, and on the unity of a nation in which beats a vast life force. The nation of Israel, that has arisen from the hellfire, is ready for any challenge.

We will remember those who were murdered, we will guarantee life.