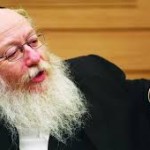 13:36 IL: It is now being reported that Yaakov Litzman, Moshe Gafne and Meir Porush have returned to negotiations with Likud.

Coalition talks between Likud and Yahadut Hatorah exploded on Tuesday morning 9 Iyar, leading to Yahadut Hatorah representatives walking out of the session. While it appeared a deal was imminent, it now appears the issue that led to the explosions is the monthly child allowance payments and no signing is going to take place in the immediate future. The issue of monthly child allowance payments has been at the core of machlokes between the chareidi parties and the prime minister for some time. During his tenure as finance minister, Mr. Netanyahu all but eliminated the monthly payments, a move that placed a stranglehold on many chareidi families.

At the start of Tuesday’s negotiating session Likud negotiators explained they have a problem with Yahadut Hatorah’s formula for monthly child allowance payments. When asked to elaborate as to the problem, Likud officials explained they cannot accept Yahadut Hatorah’s demands for the payments to become retroactive to the beginning of 2015, adding at best, they will be able to increase the monthly sum in the coming months after the state budget is passed.

After Yahadut Hatorah officials realized their objections and negotiating tactics were not going to change this reality, they got up and left.

Ladaat News explains that Yahadut Hatorah officials stated in their view, the government must be returning “the money stolen from families during the past two years and not just in the future”. It is not known when the sides will resume negotiations.